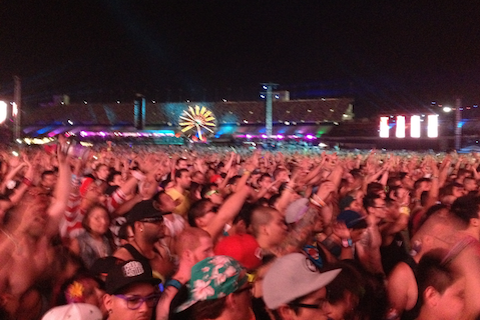 The rise of electronic dance music into the mainstream proves the music industry's resilience with a powerful, socially engaged community and sold-out arena shows. What are the secrets to success in building community, engaging fans, driving ticket sales, and growing revenue?


With more than a decade of global agency and in-house expertise in integrated marketing communications, Jaime Sarachit has led award-winning programs for some of the world's biggest brands from Barbie and The GRAMMYs to Red Bull and The Olympics. As CMO for TicketMob – the premiere forward thinking and socially-driven ticketing platform for artists, venues, and promoters – she oversees brand marketing, partnerships, PR and social media for the company's consumer-facing ticketing verticals in comedy (LaughStub), music (TuneStub), and EDM/nightlife (ElectroStub).

Previously Jaime was Director of Communications, Media Relations & Social Media at The Recording Academy (GRAMMYs) where she was responsible for elevating the GRAMMY brand year-round; overseeing media and artist relations, social media, crisis communications, special events, and strategic partnerships. She spearheaded many of the organization's digital firsts for over six years, most notably the fan-voted My GRAMMY Moment with Justin Timberlake and Foo Fighters, What's The Download digital music education campaign, event livestreams, and the annual Social Media Rock Stars Summit during GRAMMY Week. As a critical leader in building the organization's first social media team in early 2008, she developed and executed digital strategy that significantly increased press, ratings, new fan acquisition, and double-digit social media numbers year-after-year, including 2012's record-breaking 54th GRAMMY Awards. With 40M viewers, 13M social media comments, and 65K tweets per second, it reigns as the most social TV event in history.

Jaime is a Communications graduate from U.C. San Diego, where she held office as Student Body VP of Communications. Although she has received various career honors, including PR News' Top 15 To Watch Under 30 and PRSA LA's Young Professional Of The Year, this @PRGal is most proud of her diverse collection of concert tickets.


Prior to co-founding ElectroStub, Mike worked in Business Development at LaughStub where he on-boarded key clients and built the brand's social media following to 400,000+ fans/followers. After spending 2009 fully immersed in the EDM scene of Eastern Europe, while studying Entrepreneurship in Budapest, he graduated from the Marshall School of Business at the University of Southern California. For more than eight years Mike has been a partner at GC Investments, a Portland-based fund focused on emerging technologies and innovation.


Julie Kim worked at BPM Magazine as the Marketing Director of Events before pursuing Artist Management fulltime for Deckstar in 2006. Born and raised in Los Angeles, she has seen the underground dance scene transform into a household name. Working alongside artists like Steve Aoki, Nervo, RAC, and Classixx to name a few, she remains dedicated to the dance music scene and focused on preserving its integrity.


In 2006 Drew Best created SMOG to fill a void for Dubstep music in Los Angeles. What was meant to be one event turned into multiple and a music culture was born in LA. Along with his partner 12th Planet, Best founded Smog Records as an outlet for locally produced music. Today Smog has became an internationally known brand working with a variety of electronic music producers. Smog continues to produce events as well as maintain an independent record label and a music publishing company. Drew Best also moonlights as a motion graphics designer working on concert visuals for touring musicians.