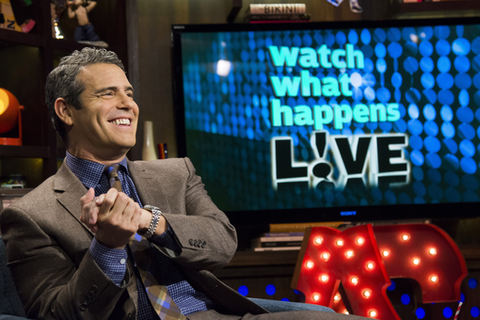 Executive producer and host of Bravo Media’s “Watch What Happens Live,” Andy Cohen, along with executive producer Michael Davies discuss the evolution of the show from a web series to a five night a-week, on-air success. As one of the only live, late-night and interactive talk shows, “Watch What Happens Live” boasts one of late night’s most digitally engaged audiences in cable with thousands of fans personally connecting with host Andy Cohen and his celebrity guests via Twitter nightly. “Watch What Happens Live” features guests from the world of entertainment, politics, and pop culture. The series includes lively debates on everything from fashion, the latest on everyone's favorite Bravolebrities, and what celebrity is making headlines that week.

Cohen started at Bravo in 2005 as Senior Vice President of Original Programming & Development and was upped to Executive Vice President of Original Programming & Development in December, 2010. Since then he has overseen an aggressive slate of unscripted series and specials including hits such as the Peabody Award winning "Project Runway," "Queer Eye," "Work Out," “Being Bobby Brown,” “Top Design,” “Make Me a Supermodel,” “Blow Out,” “Kathy Griffin My Life On the D List,” “The A List Awards” "The Millionaire Matchmaker," "Million Dollar Listing," “The Rachel Zoe Project,” “Work of Art: The Next Great Artist,” “Bethenny Ever After,” “Tabatha’s Salon Takeover” and "Flipping Out."
Previously, Cohen was Vice President of Original Programming for TRIO (pop, culture, TV), beginning in July 2000. He was responsible for developing and supervising all of TRIO's original productions including the critically acclaimed original documentaries "Gay Republicans," "Easy Riders/Raging Bulls," "Brilliant, But Cancelled," and the original series "Pilot Season,” "24w/" and "Parking Lot."

Cohen received an Emmy award when season six of “Top Chef” won Outstanding Reality Competition Program at the 2010 primetime Emmy awards and has been nominated for eleven additional Emmy Awards as Executive Producer of "Project Greenlight," "Project Runway," "Top Chef" and "Queer Eye." In 2005, Cohen was awarded a Peabody Award for his role as Executive Producer of the TRIO documentary "The N Word" and another in 2008 as an Executive Producer of "Project Runway." He is featured regularly on “Today,” “Morning Joe” and “Joy Behar.” Cohen has cohosted “Live! with Regis and Kelly” and the 10:00am hour of “Today.” He has also been a guest on “Late Show with David Letterman,” “Late Night with Jimmy Fallon” and “The View.” In 2011 he graced the cover feature for Hamptons Magazine, and was profiled by The New York Times, Glamour Magazine, Vanity Fair and People Magazine. In 2011 he was also featured in TV Guide’s “Hotlist” and OUT’s “Out 100” issue. In 2010 he was profiled by TV Guide Magazine. In 2009 he appeared on the cover of The Advocate and was profiled in New York Magazine, The New York Times, the LA Times, and Entertainment Weekly In June 2010, he was listed as one of TV Guide’s “25 Most Influential People in Television.” OUT Magazine put Cohen on their OUT 100 List in 2008, and named him "hottest blogger of 2006" in their annual "hot" issue and in 2007, Cohen was named one of Multichannel News’ "40 Under 40" innovative and formative executives at work today.

Prior to working at TRIO, Cohen spent 10 years at CBS News as Senior Producer of "The Early Show," overseeing the production of entertainment segments. Cohen also served as a producer for CBS News' "48 Hours" and for "CBS This Morning," where he produced live segments, celebrity profiles and covered breaking news including the Oklahoma City bombing, Hurricane Andrew, the California wildfires, and the crash of TWA Flight 800.
Born in St. Louis, Cohen is a graduate of Boston University where he received a B.A. degree in broadcast journalism. Cohen is currently on the board of directors for charity Friends In Deed and currently resides in New York City.