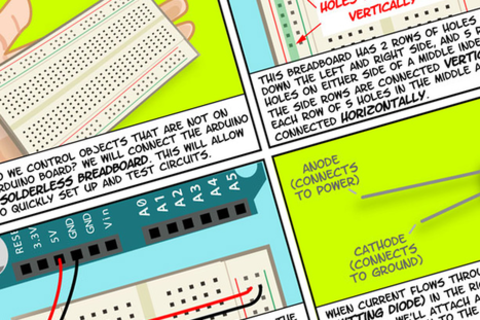 From Will Eisner’s PS Preventive Maintenance Monthly magazine created in the 50's for the US Army, to Scott McCloud’s cartoon introduction to Google Chrome, comics have often been used to describe technical material. Comics unique combination of words and images can be very effective in the DIY/Maker world, to explain how to build/wire/solder a project or to document the process of a build. This session will look at how comics are being used in the maker space and at various tools that can be used to produce comics to explain or to document the construction of a project.


Jody Culkin is an artist and educator whose work has been exhibited throughout this country and internationally. Her comic Arduino!, an introduction to the Arduino microcontroller platform, has been featured on Boing Boing, Engadget, Gizmodo, Makezine, Lifehacker, Arduino Playground and many other sites and has been translated into 6 or more languages. She currently has an exhibition, Refashioned, at the Boca Raton Museum of Art. She is a professor in the Media Arts and Technology Department at the Borough of Manhattan Community College, where she teaches web development, animation and graphic design.