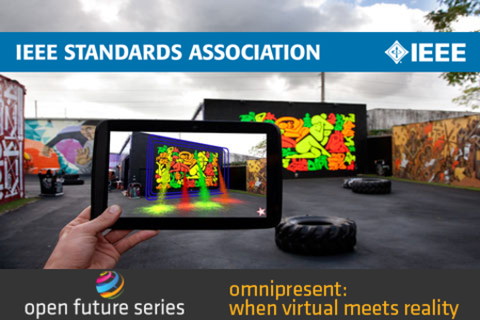 When the “virtual overlay” meets everyday life, everything changes, from the way we shop to the way we interact with the world around us. Today, augmented reality is moving beyond the virtual dimension to enhance real world experiences, meshing with and revolutionizing interactive training, real-world simulation, design, architecture, manufacturing, medicine and more. This panel explores new advancements in Virtual / Augmented Reality and the short and long-term impacts AR may carry. We'll also explore the not-so-distant future, highlighting the creative opportunities that exist for the development of new AR solutions, standards and enabling technologies. Sponsored by IEEE.


Deriving his pseudonym from his fondness for philosophical discussion, BC "Heavy" Biermann possesses an interdisciplinary background that comprises technology, academia, and the arts. With a PhD in Humanities [ Intermedia Analysis] from the Universiteit van Amsterdam, BC has worked as both a university professor and a tech developer in Anaheim, Prague, and Saint Louis. Since 2007, BC has internationally presented his academic work, which explores augmented reality, art and semiotics in public space.
As a kind of synthesis between scholarly inquiry and emerging media, BC founded The Heavy Projects [and its collaborative spin-off Re+Public ] to investigate how the fusion of creativity and technology can uncover new modes of relaying ideas. Building upon existing technological and theoretical frameworks, Heavy creates innovative interfaces between digital design and physical worlds in ways that that provoke the imagination and challenge existing styles of art, design, and interactivity.
After finally giving up his painfully amateur skateboarding career due to a bum right knee... BC plans to use his extra time continuing to examine meaningful ways to fuse tech + creativity.


Blair MacIntyre is an Associate Professor in the School of Interactive Computing in the College of Computing at the Georgia Institute of Technology. He directs the Augmented Environments Lab, which focuses on the design and implementation of interactive mixed-reality and augmented-reality software, games and experiences. He leads the Argon AR Web Project, which is developing web tools for AR games and experiences, and runs the AR Game Studio at Georgia. He teaches game architecture and design classes, in addition to classes on AR experience and game design. His lab recently released the AR game "Nerdherder" on iOS and Android, and is currently using the Argon AR Web technology to develop games using web technologies. He is co-founder of Aura Interactive, an AR design and consulting firm.

He has been doing research in augmented reality since 1991. He is actively involved with numerous conferences and workshops, most recently as Program Chair for ISMAR 2012 (International Symposium on Mixed and Augmented Reality) at Georgia Tech. He is the recipient of an NSF CAREER award, received a Ph.D. from Columbia University in the City of New York in 1998, and B.Math and M.Math degrees in Computer Science from the University of Waterloo in Canada in 1989 and 1991.


Christine Perey has worked for more than 20 years in the domain of rich media communications, initially in the area of dynamic media technologies on personal computers; she founded, was the editor and publisher of the QuickTime Forum, a publication for QuickTime developers 1991-1993.

As consultant and analyst, Christine is an active leader of new mobile industry initiatives. For example, since 2009 she has organized and conducts meetings of the advocates for open and interoperable AR around the world.

PEREY Research & Consulting studies and advises vendors, application providers, research institutes and network operators on the design, launch and operation of a range of mobile augmented reality and Internet of Things-based products and services.


Jay Iorio is the Technology Strategist for the IEEE Standards Association. His primary focus is virtual worlds, augmented reality, and serious games. Iorio built and currently manages IEEE Island in Second Life and has worked extensively with advanced publishing technologies, multimedia, and 3D user interfaces. He is also a composer, machinimatographer, and creator of the Etherfilm studio complex in Second Life. Iorio is based in Los Angeles.