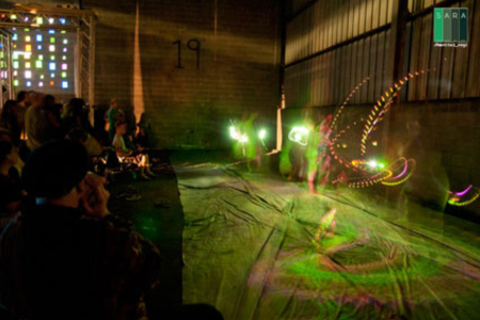 Margarita Benitez and Markus Vogl work within a collaborative art praxis called //benitez_vogl. //benitez_vogl concentrates on open source projects such as the development of the open source loom, interactive installations and applications and co-configuration tools.
For this particular presentation we will showcase a brief breakdown on how our collaborations’ work and to inform about 3 of our current projects:
OSLOOM (short for OPEN SOURCE LOOM) is a project aimed at creating an open source electromechanical thread-controlled floor loom that will be computer controlled.
S.A.R.A. is an interactive software application (App) written for mobile computing devices, that creates its own sounds and visuals based on the camera recorded video input.
Coded :: Fashion is a project at the intersection of new media and fashion design. It investigates the role of the designer and consumer. More @ http://benitezvogl.com/


Margarita Benitez’ interdisciplinary background mixes art and technology, interface design, tangible computing, 3D, architecture and fiber/material studies. She received her MFA in Art + Technology Studies thru a Trustee Scholarship from the School of the Art Institute of Chicago. In addition to working with fashion technology and e-textiles, her current research explores the concept of pret-a-faire (ready-to-make) thru generative fashion applications and she is currently developing OSLOOM, an open source thread-controlled loom (funded thru Kickstarter and a Farris Family Fellowship Award.) Her work has been exhibited nationally, internationally and is part of museum and private collections. Most recently she presented her work at COLLIDER 4 :: SPECTACLE, at the BIFT/ITAA Symposium at Beijing, the New Media Art Caucus Artist showcase at the 100th Annual College Art Association Conference and at the 2012 Smart Fabrics Conference. She will be the Fulbright-Quartier21/MuseumsQuartier Artist-in-Residence for 2012-2013 for the project open thread : wien. She received a 2012 NEA Artworks Grant for co-curating the exhibition Shifting Paradigms of Identity: Creative Technology and Fashion and a 2012 NEA Media in Arts Grant for S.A.R.A.: Synesthetic Augmented Reality Application, a wearable synesthetic performance device. She is currently the Fashion Technologist and an Assistant Professor in Fashion Design at The Fashion School at Kent State University.


Markus Vogl is a NE Ohio based multimedia artist experimenting in multiple sensory experiences combining sound, environments and interactive installation. He has exhibited internationally in the U.S. and Europe and has been recognized in Leonardo magazine for his collaboration Circadian Capital. Markus is also a designer servicing clients like mun2 or mtv latino in his former Miami, FL business pixel foundry. He holds a Masters of Fine Art degree in New Media from Donau Universitaet Krems/transart institue.
Most recently his work was featured at COLLIDER 4 :: SPECTACLE and the BIFT/ITAA Symposium at Beijing. He has received the 2012 NEA Media in Arts Grant for S.A.R.A.: Synesthetic Augmented Reality Application, a wearable synesthetic performance device.
He currently is an Assistant Professor at the Myers School of Art at the University of Akron.