The Playful Viewer: Gamification of a Documentary 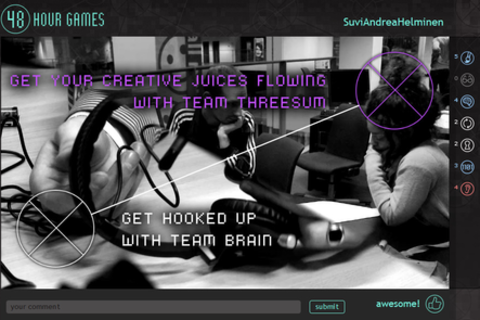 This panel discussion springs from the newly released interactive documentary 48 Hour Games which takes place during the Nordic Game Jam, where teams are followed through their creative process, as they struggle to create computer games from scratch under time pressure, leading up to the grand finale. The documentary presents an authored branched narrative structure. Viewers choose which characters to follow and favor, by doing so they unlock bonus sketches, sound tracks, video clips and games depending on their preferred choices of storyline.

48 Hour Games attempts to tell a real life story in a playful way. Some people label it as being gamified, but what does that actually mean? With this documentary as a starting point, the panelists look at the concept of gamification and beyond. We will examine the thin, dynamic borderline between player and a viewer, and the slippery slope between structure and free form. We will explore the limitations and drawbacks of gamification and try to find the essence of an immersive, interactive documentary experience.

Examples from 48 Hour Games will be presented during the panel, but you are welcome to prepare yourself here: www.48hourgames.com . Come and join us in a fruitful discussion!


Bart Hufen is author of the book 'A Brand New Playground' about using games as a tool for behavioral change. As a concept developer he helps companies and brands to use game mechanics for their business objectives. Download his book for free at www.brandnewgame.nl/book


Jigar Mehta is a digital entrepreneur, documentary filmmaker and journalist. Prior to joining Matter, he co-founded Groupstream, a collaborative storytelling platform that harnesses the power of a group’s social media. It is a startup that grew out of the acclaimed web native documentary project, 18 Days in Egypt. The project began in 2011 while Mehta was a John S. Knight Fellow at Stanford University and is an inaugural awardee of the Tribeca Film Institute New Media grant and the Sundance Institute’s New Frontier Lab. Before Stanford, Mehta was a reporter and video journalist for The New York Times and played key roles on several award winning documentaries, including Wonders are Many and My Flesh and Blood. Mehta has a Masters in Journalism and Bachelors in Engineering from the University of California, Berkeley.


Suvi is a documentary filmmaker, editor and lecturer based in Copenhagen, Denmark and in Boston, MA. She graduated from The National Film School of Denmark in 2003. She has directed several award winning documentaries, screened at festivals and on national television. Works include “Theresienstadt” (2010), “Turf War in No Man’s Land” (2009), “On the way to Paradise” (2007), “Love and Broken Glass” (2006), “Land of Mist” (2003). Within the last couple years, she has moved towards the interactive documentary and cross-media field, and “48 Hour Games” (2013), which was commissioned by The Danish Film Institute , is her first interactive release.