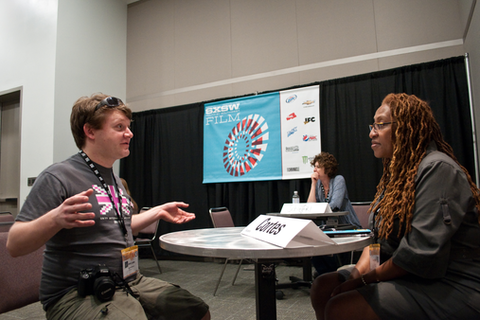 Every filmmaker has a story to tell. Get advice, or share those stories with experienced filmmakers in our Narrative Filmmaker Mentor category.


Aaron moved to Austin Texas in 2001 and studied film-making at the University of Texas.

He had his first directed short film BLIND premiere at the SXSW Film Festival in 2004, and his most recent short NO WAY OUT premiere at the 2011 Fantastic Fest, it was also recently selected as the Vimeo 'Short Of The Week'.

In 2010 he optioned the feature script THE HOME, that he co-wrote with writing partner Eric Vespe, to producer Elizabeth Avellan. The script is now in development.


Kyle's feature directing debut ROOM premiered at both Sundance and Cannes' Directors' Fortnight. His follow-up anthology FOURPLAY had segments also play at Sundance and Cannes and is touring North America through April 2013. He is also a working film editor (e.g. Heather Courtney's Emmy and SXSW award winning Where Soldiers Come From and this year's SXSW premiere PJ Raval's Before You Know It) and teaches film production at Northwestern University.


Todd Rohal made his feature directorial debut with The Guatemalan Handshake, which premiered at the 2006 Slamdance Film Festival and won the Special Jury Prize. In 2011, Rohal directed The Catechism Cataclysm which played at the Sundance Film Festival and SXSW and was released by IFCFilms. In 2012 he directed a film that premiered at SXSW and was distributed by Magnet Releasing, but that's a secret. He lives in Austin, TX.