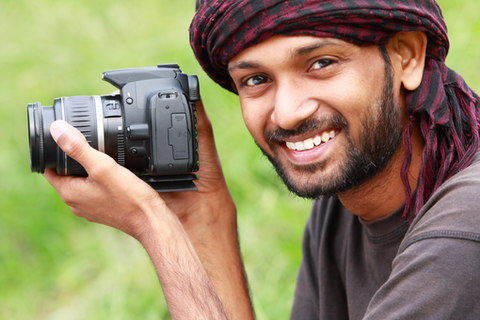 Video is a powerful way to tell and share stories. Organizations around the globe are finding innovative ways to use collaborative video storytelling to make a difference in the world. With the explosion of online video sharing, high quality video cameras built into mobile phones and more accessible video editing tools, video as a medium for sharing ideas and telling compelling stories has never been so available and easy.

In this session, representatives from the Qatar Foundation and the Global Women’s Empowerment Network will share how they have used these new video tools to bring together a global community and affect change. You'll learn about specific tools and techniques for doing this on a small budget, with limited infrastructure. Through their examples you will find new ways to share your message and inspire any audience.

Tess Cacciatore is an award-winning producer, videographer, journalist and social entrepreneur who has dedicated her life advocating for peace, justice and equality around the globe.

Prior to co-founding GWEN, Cacciatore was the founder and executive director of the World Trust Foundation, an organization that mentors youth to become future leaders working for a sustainable world.

Throughout the past decade Cacciatore has traveled the globe connecting youth-focused non-profit organizations, inspiring youth to learn, think and take action for positive change in their lives, in their local communities and in the global community.

Cacciatore has spoken regularly at the United Nations (Geneva and New York) and other international platforms on behalf of children and the important use of media and technology to bridge the cultures of the world.

She has addressed thousands of people through numerous conferences, workshops and festivals, and millions through radio and TV appearances. Media appearances include: “The Today Show,” “Prime Time with John Stossel,” “Waking Up in America,” “The Lisa Garr Show” and several cable talk shows. She has also appeared in such publications as: Family Circle, New York Times, Los Angeles Times, Chicago Tribune, Des Moines Register, and Parenting Magazine.

Cacciatore hosted a weekly radio show called “Live Feed” to raise awareness of the FEED 333 program under the World Trust umbrella that spanned each holiday season from 2005-2008. She recently appeared in three feature films about her work (“The Millionaire Mind,” “The Peace Project,” and “Voices of Women”).

Cacciatore’ s career as a producer in the entertainment and technology industries has spanned more than 20 years, and drives the global productions through GWEN. Productions and events include: Earth Day LA, Human Rights Symposiums for Youth, live-streamed broadcasts connecting world leaders at the United Nations in Geneva, Switzerland, and fundraising programs that have served the homeless and needy globally. Cacciatore was an instrumental part of raising funds to feed 1.3 million children in 33 days through social networking and build 38 homes in Sri Lanka in answer to the 2005 tsunami. She has traveled the United States and abroad to conduct empowerment camps, workshops and mentorship curriculum, to name a few.

Cacciatore has participated on many boards over the years including Women’s National Book Association (WNBA) where she held the position of vice president and interim president of the Los Angeles Chapter. She also served on the board of Offbeat Prodigies (an organization that mentors gifted children with special needs). She is also a founding member of the Women’s Speakers Association.

In 2003 Cacciatore was awarded the Fete d’ Excellence within the Sub-Commission for Human Rights at the United Nations (Geneva, Switzerland) for her work in educational entertainment.


Chris is an accomplished artist, educationalist, environmental activist and innovator. He currently serves an Education Technology Advisor to various organizations across the globe.

One of his most recent projects entitled “Mapping the Mangroves”, created for Qatar Foundation International, allows the public and scientists alike not only to share relevant data about the health and well being of Mangrove Forests around the world, but also to bridge relationships across the globe, forming new communities of practice and developing lasting bonds. It has been deployed in Qatar, Costa Rica, Brazil, Florida, Papua New Guinea, Australia and Palau. Conservation International and Carnegie Mellon University are now collaborating on the initiative to further spread and disseminate information about the importance of these fragile ecosystems.

Prior to serving as an Education Technology Advisor, Chris co-founded and opened two IB dual language immersion Schools in Washington, DC. One of these schools offered the first full immersion IB Arabic program and Peace Studies program in the United States.

He was co-founder of CAVE – The Center for Collaborative Art and Visual Education - a nonprofit organization devoted to exhibiting local, national and international artists and providing a collaborative arts production facility.

He is a member of Société Imaginaire, an arts organization based in Chemnitz, Germany and is an active member of The National Press Photographers Association and the Washington Project for the Arts. He is a published author, and his photographic work has been exhibited widely around the world and hangs in numerous public and private collections.

His ultimate passion lies in upholding the human experience and exploring the nature of our common struggles, while hopefully inspiring critical thought and compassion in the process. He strives to live completely in the moment.


Mark Floisand is VP, Sales & Marketing, with WeVideo, an online video editing company based in Palo Alto, CA. Mark is a seasoned executive with over twenty years' global experience in the high-tech sector, spanning blue chip and start-up companies across three continents. He has general management, sales, marketing, e-business and operations expertise, acquired through his time with Apple, Adobe, Business Objects, SAP, Total Defense and Untangle.