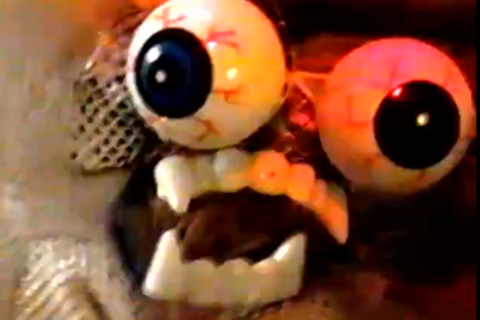 For 48 hours, a fan video for the Miami band Jacuzzi Boys took the internet by storm. The video featuring singing vaginas, used as puppets and dressed like various pop icons, amassed almost 700,000 views on YouTube while evading censors, inspiring passionate debate, love or outrage. The girls, dubbed "the Jacuzzi Gals" who created it were asked to do interviews, receiving tons of attention on their blogs/social media. Then suddenly the video disappeared. What happened to the Jacuzzi Gals?
This is the story of how the video and the gals were all created by filmmakers Jillian Mayer and Lucas Leyva, and the nasty battle between them and the band's "indie" record label, how they found themselves receiving strong letters from Warner Bros. lawyers. Issues of intellectual property, fair use, parody/satire, the myth of indie, corporate control of culture, performance art, digital identity, and the future of digital video will all be explored through the scope of musical labial puppetry.


Jillian Mayer is an artist and director living in South Florida.
Her video works, installations, and media based projects have been exhibited at museums, galleries and film festivals worldwide.

Mayer's work often employes varying platforms including social media sites and meta-pop music with her band #PostModem. The band exists as a performance collaborative that makes pop music based in art and web-theory. Their original songs will be used in a feature length musical film that Mayer is writing, directing and producing in collaboration with Lucas Leyva.

As 1/2 of MayerLeyva, their films have premiered at Sundance film Festival, SXSW, and some festivals around the world. Recently, they have been listed as "25 new faces of independent film" by Filmmaker Magazine. Their music videos have premiered on Pitchfork, Stereogum, NME, Vice and Rolling Stone and have been named to various year-end Top 10 video lists, including IFC.
They live and work in Miami, FL where they help run the Borscht Corp. collective and the Borscht Film Festival.

She is a recent recipient of the South Florida Cultural Consortium's Visual and Media Artists Fellowship 2011, the Cintas Foundation Fellowship 2012 and was recently featured on the cover of Art Papers and in ArtNews discussing identity, Internet and her artistic practices and influences. Upcoming projects include a solo show at experimental art space Locust Projects in Miami and an artist book by [Name] Publications in Spring 2013.


Lucas Leyva is a filmmaker and retired playwright from Miami, FL. Twenty-one of his plays were produced across seven states and one was a Heidenman Finalist. Films he has written and directed have screened at Sundance, SXSW, Slamdance, and over a dozen other festivals and won awards at the Boston Underground Film Festival as well as the Mofilm Competition at the Tribeca Film Festival. This year he was named one of the "25 New Faces of Independent Film" by Filmmaker Magazine.

He is the founder and Minister of the Interior of the Borscht Film Festival, called the "hippest, most eclectic and electric movie festival in South Florida" and “Miami’s alt culture summit” by the Miami Herald and named "Miami's Best Film Festival" and compared to "Sundance on psychotropic mushrooms" by the Miami New Times.

In 2011 he officially founded the Borscht Corporation, an interdisciplinary microbudget independent production house that helped create over 40 short projects in Miami, FL in its first year. Funded by a Art Challenge grant from the John S. and James L. Knight Foundation, the projects have since gone on to play over 50 international film festivals.

He is also a published poet, playwright, and has directed musical plays at the Adrienne Arsht Center. Recently, Lucas was named one of the "top 100 creatives" in Miami by Cultist, "top 20 artists under 40" by the Miami Herald, one of the "power 30 under 30," “Miami’s champion of independent film” by CoolHunting, and one of "33 Emerging Creative Minds" by SoFi Magazine.

As ½ of MayerLeyva, his music videos have premiered on Stereogum, NME, Vice, Pitchfork and Rolling Stone and have been named to various year-end Top 10 video lists, including IFC, as well as exhibited in the Guggenheim museums in New York, Berlin, Bilbao, and Venice as part of a creative video biennial. They have created three viral videos, one of which "I Am Your Grandma" became an unlikely pop sensation that has been spoofed on various TV shows and was featured on the cover of Art Papers Magazine in September/October 2011.

He balances his artistic career in Miami with his career as a midfielder for the Liverpool football club and the Brazilian national team.