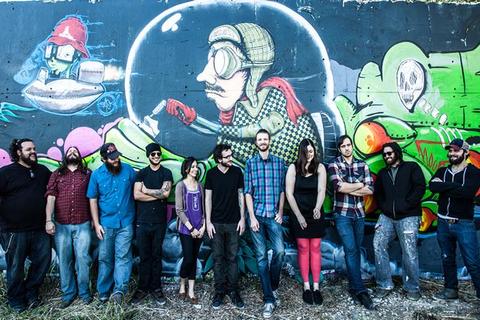 Listen to Salinger is Dead

East Cameron Folkcore (ECF) is a collection of individual artists working for a common goal: to create music that resonates, that tells stories, and that speaks the truth. This 11-piece band performs authentic, American music at its most raw and simple definition: a blend of wide-ranging sounds combining folk, blues, rock, country, jazz, bluegrass and punk that articulates the varied background and influences of all the players. It is a sound that is as familiar as it is totally new to the ears, and it is all their own. The band's sophomore LP, "For Sale" was released on February 5, 2013, and was featured by MTV Hive, AMP Magazine and Revolver Magazine. For Sale's release show was a full-scale theatrical production in which ECF performed the album in its entirety to a sold-out audience at Austin's Scottish Rite Theatre on February 8th. The performance was reviewed by KUTX, The Austin Chronicle, The Austinist, OVLRD and do512. They are currently unsigned.