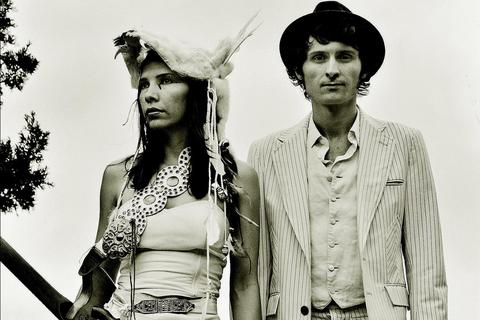 Photo by Darin Back

Carley Wolf's grandfather, Frank "Papa Pancho", was a Texas Ranger in the early 1900's. Riding on horseback in a beautiful wide brimmed hat, he was not famous for what he did carry - a Colt .44 "Peace Maker" revolver - but for what he didn't need to bring along on duty - handcuffs. His reputation as an ace shot kept his prisoners from running - nothing stops a fleeing convict like a chunk of lead traveling faster than the speed of sound.

Fast forward nearly a hundred years, and you will find this exact stripped down "Don't Fuck With Me" attitude in everything that granddaughter Carley does with her Austin, TX based band, The Ghost Wolves. Her one string guitar. Her white leather, ass-kicking boots and custom designed stage wear. Her 130 Watt, earth rattling, louder-than-the-lord amplifiers. Her on stage presence - a dominating force - always smiling, laughing at the end of every song in her sugary sweet, school girl giggle, leaving just enough air for a half breath before she turns up the volume again, her guitar tone a 125 pound kick to the gut, half chainsaw, half gattling gun.

Carley formed The Ghost Wolves in 2011 with her now-husband, Jonny, a 23 year old drummer from the northeast USA who had previously played behind a long list of bands and artists - including country