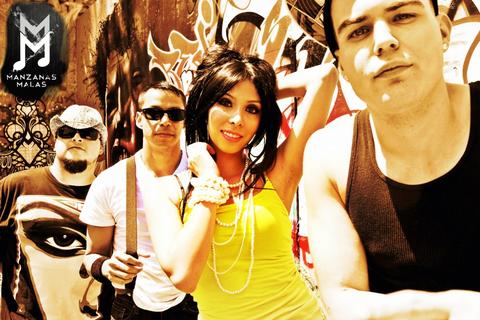 Both DJ Villa & ALDO were enshrined into the Top 10 of The Best of Austin Music Awards 2011 Contest held by the Austin Chronicle each year.

There may be no group in Austin right now as suave, sultry, and infectiously grooving as Manzanas Malas. Helmed by Victoria Acosta with standout bi-lingual rapper DJ Villa serving as counterpunch and opposite anchor, the energetic group melds smooth R&B and Hip-Hop with jazz and Latin influences and hard driving dance beats. While the Black Eyed Peas are an inevitable point of comparison, as much for LBA’s diversity as their sound, the group’s eclectic vibe feels like a distinctly Austin hybrid, and their backgrounds from classically trained mariachi, samba, cumbia and jazz, to streetwise rhymes, to Latin pop all come to bear on their newest album & videos in the works!!

Los Bad Apples / Manzanas Malas have already started garnering international acclaim, and have some exciting upcoming collaborations in the works that will likely be bringing them much more attention in the next few months.