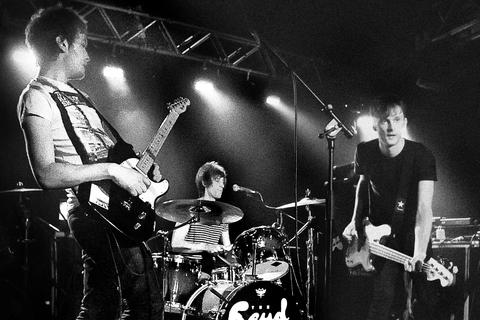 Listen to It Ain't Right

Since their first jam together in a small, dirty rehearsal space somewhere in the suburbs of Manchester, the three talented musicians soon found a unique style, "…mixing driving riffs with electronic samples and pulsing beats that result in organic dance rock" (Kerrang! magazine), leaning on their influences of Soulwax, Oasis, Muse and Does It Offend You, Yeah?. Having originally grown up amongst the picturesque landscape of the Lake District, The Feud are now based between Manchester, UK and Los Angeles.

Their debut single In Between The Lines has had much critical acclaim and praise, attracting attention from all over Europe. The summer of 2010 saw The Feud set sail on their first self-funded, self-run tour, playing across the UK supporting Juliette Lewis only to head into mainland Europe soon after to perform at a handful of large festivals, playing alongside acts such as The Prodigy, Editors, The Subways & Muse, soon after returning for their own headline tour.

The Feud have since embarked on a nationwide support tour in the UK to sell-out crowds in 2011. As a result, the band are quickly gaining a reputation for having a raucous, energetic live show. Jamie Walker, guitarist and vocalist, explains, "when we play a show, we want the audience to leave feeling like they've been to a club and a rock gig rolled into one". Stephen, bassist and backing vocalist, adds, “the goal with our music is to make you mosh your head and wiggle your ass at the same time, delivering a show filled with energy".

Whilst working hard independently, The Feud self-released their single It Ain’t Right in June 2012. This single was hand picked by BBC Radio 1’s Huw Stephens and chosen as his record of the week which resulted in airplay on all daytime shows on BBC Radio 1 and a live performance. Since then, The Feud have carried on working tirelessly writing towards their debut LP and playing their own headline shows.

The Feud are currently based in Los Angeles recording their debut album in LA with Timmy “The Terror” Anderson (Young Blood Hawk, Lana Del Rey, Dizzie Rascal, Ima Robot) co-producing having spent the last two years writing, whilst performing at occasional shows supporting the likes of Anberlin at the House of Blues Sunset.

Each and every song so far has been recorded by The Feud, in The Feud’s lounge.

“Do not box them in to one genre… this is a great sound. How is this band unsigned?”
Greg James, BBC Radio 1

“The Feud can generate monster energy… it is an incredible sonic force that pumps the crowd to get crazy, and they do… 9/10”
Music Connection Magazine

“The Feud are phenomenal…how they are unsigned is utterly beyond me”
Music Editor, St Paul’s Lifestyle Mag

"The Feud have a really interesting sound… we'd be surprised if your head wasn't nodding along to their tunes..."
106.1 Rock Radio