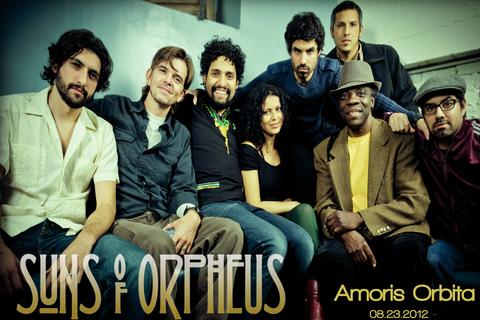 The deep creative impact and musical goodwill generated in Austin, Texas these past years by Frederico Geib—Brazilian born frontman of the global fusion ensemble Suns of Orpheus—has inspired the independent music mecca to declare August 23, 2012 “Frederico & Suns of Orpheus Day.”

This special day doubles as a CD release party for Amoris Orbita, the band’s first full length recording whose rich blend of American, Brazilian, Latin and other world music influences creates an exciting new stylistic hybrid Geib dubs “International Psychedelic Pop.” In addition to receiving this honor and performing live at City Hall, the band celebrates the release with a party at the legendary club Antone’s. The impending honor, in part to acknowledge the hundreds of music events Geib has produced in Austin, was the catalyst for Suns of Orpheus to, as the visionary musician and songwriter says, “complete the album in a short period and with very limited means.” The resulting ten track collection is an eclectic and exotic swirl of sensuous world beat grooves, rock and psychedelic sounds that are influenced by funk, reggae and world music of the early 70s. With songs written in three languages, Suns of Orpheus transcends musical and cultural barriers while exuding explosive energy, charisma and universal appeal in their live shows.

One of the most amazing things about the rise of Suns of Orpheus on the Austin scene is the fact that when Geib’s gathering of longtime musical cohorts (electric guitarist Greg Jones, bassist Alan Uribe, drummer Mike Longoria) and newcomers got together to record their debut EP in June of 2011, they had never played a single live gig. Quickly establishing themselves on the scene, Suns of Orpheus played five high profile Austin shows in 2011. They were also paired with international artists like Tita Lima, who used them as her band at South By Southwest 2012. They played alongside top emerging Brazilian artist Luisa Maita and opened for Ozomatli, in addition to performing at the Pecan Street Festival (25,000 attendees). During SXSW, The Austin Chronicle Music Poll ranked Suns of Orpheus in their Top Ten in two categories: “Best New Band” and “None of the Above,” a list designating artists who don’t fit neatly into a single genre.

Orpheus, the Greek god of music for which the band is partially named, would surely be pleased with the musical and lyrical poignancy, rhythm and diversity on key tracks of Amoris Orbita. “Encanto” begins with the utterance of the Brazilian word for “enchantment,” and this sets the tone for a piece that begins with an Afro-Brazilian beat but then evolves into a pop funk joint; one of the inspirations was the Brazilian martial art of Capoeira, which is practiced by the band’s drummer Mike Longoria. The exotic retro rocker “Deseo Mayor” traverses countries and decades as the Geib’s powerful lyrics respond to the Occupy movement with a call to make inner soul adjustments before you can consider affecting outer changes. While “Tree of Love” (which starts out balmy and tropical before exploding into a freewheeling bluesy African jam) is dedicated to Geib’s late friend, jazz guitarist Daniel Frouman, the dreamy and hypnotic title track “Amoris Orbita” touches on the
arduous path that someties we must traverse in order to meet the beloved.

A handful of years after his departure the successful world music band Ghandaia, Geib says, “I wanted to create a situation where each musician felt like they were bringing some serious creativity to the table, where each would shine like the Sun. We’re happy to declare that Suns of Orpheus is not for purists. Amoris Orbita has some funk, reggae, Brazilian, pop and psychedelic sounds, sung in three languages…and on future records, we might have five or six! I think the world is already there, in terms of our daily experience, but few artists have been able to successfully blend the cosmopolitan vibe we all experience into a cohesive sound. Personally I feel the music reflects my deep desire for humanity to evolve its consciousness simply because I am a father of two amazing children and I want them to know that there are a lot of people out there doing their part to appeal to things like hope, intelligence, love, justice and spiritual evolution.”