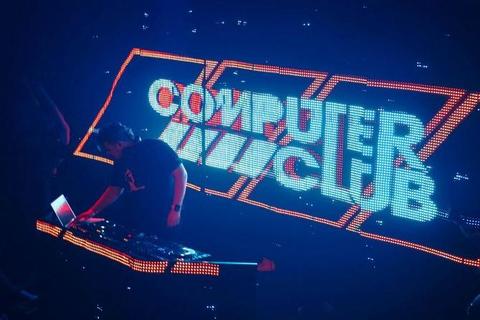 Listen to Win Or Lose

The Computer Club sound first emerged from the studio of Gigantor in 2007 when his single “Load Rocket” started gaining artist acclaim and making noise in the blog circuit. The song, one of the first completed by Gigantor under the geeky guise, carried Computer Club’s name into both traditional record label outlets and the burgeoning music blogosphere alike – a trend rarely seen in the heavily populated landscape of today’s dance music. Original songs like “Flat Response” and “Laptop Levitation” showcase Computer Club’s highly honed sound design and audio engineering skills, while his edits of Nine Inch Nails, Friendly Fires, Prince, and New Order illustrate his ability to adapt the best of the big names to the dancefloor.

Along with his impressive studio output, Computer Club is a well-accomplished DJ by any measure. His steady stream of gigs has him traveling to every corner of North America with regular stops in New York City, San Francisco and everywhere in between. From rocking a strong crowd at L.A.’s Electric Daisy Carnival to dropping an intimate set for his former home of Atlanta, Computer Club constantly exhibits his deftness and versatility behind the decks.

While remixes of Combichrist's "Throat Full Of Glass," Mr. Oizo’s “Flat Beat,” Jewel Kid's "Break My Heart" and his notorious collaborative re-working of Konflict’s Drum & Bass anthem “Messiah” with Le Castle Vania have helped propel his name to new heights, Computer Club also released an EP titled “Nerd Secrets,” which to showcases a wide swath of musical styles, ranging from dancefloor-filling, hands-in-the-air bangers to rock-inspired songwriting to experimental dancefloor weirdness. Among the tunes on "Nerd Secrets" was the heavy hit 'Losing Streak,' featuring vocals by UK pop genius Frankmusik, this tune charted in the top 40 in the UK and also went to number 1 on hypemachine.

In addition to his Computer Club moniker, Mike continues to push the boundaries of dance music as one third of Evol Intent, a hard-hitting Drum & Bass trio considered by many fans and DJs alike to be the genre’s most talented American group. Initially known as purveyors of the toughest brand of D&B, their debut album “Era of Diversion” exhibits a musical variety influenced by everyone from Radiohead and Aphex Twin to Slayer and N.W.A.