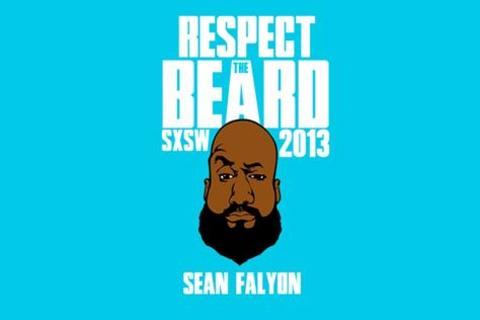 For Sean Falyon, being everywhere means more than showing up at every show or party he hears about. Sure, the Philadelphia MC has made his name by remaining ubiquitous since his 2004 migration to Atlanta, but Falyon’s constant presence goes beyond appearances. His goal is to use his numerous talents to stay at the top of fans’ minds no matter where he and his trademark beard are physically located.

“If I’m not there, they’re talking ‘bout me,” says the self-styled marketing guru while explaining the concept of his “Be Everywhere” mantra. Houston musician Cory coined the phrase after constantly running into Falyon at events across Atlanta; it’s defined his tireless hustle ever since. Whether Sean is rapping, hosting, or sharing his eventful life and times with fans via social media, he takes the catchphrase to heart in all aspects of his career.

Mastering the grind of an indie artist has been a process for the self-managed rhymer who handles everything from booking shows to his own album artwork. But Falyon’s hustle was instilled in him long before he entered the rap game. “I was making custom t-shirts, selling CDs; I sold hair weave,” he remembers of his college days. But once he moved to Atlanta and got the opportunity to try his hand at rap, his high-powered work ethic found a new outlet.

“I linked up with Bone Crusher because I was doing some clothing stuff with him,” remembers Sean of the relationship that birthed his rap career. Though he’d been rhyming recreationally since high school, it wasn’t until the “Never Scared” MC asked Falyon to hop on his mixtape that he saw it as a tangible hustle. “After that I just took rap serious— I seen people getting money off of it.”

But his love of Hip Hop goes much deeper than his financial ambitions. After entering ninth grade at age 13, he and his friends became obsessed with tagging graffiti and battle rapping. “We was just so Hip Hop,” he remembers of his connection to the culture, which has remained a driving force throughout his life. Fast-forward to travelling the world with Bone Crusher’s camp in the mid-to-late 2000’s and it would seem he was living the dream. But it wasn’t until his mentor shared some wisdom that he truly understood the reality of the opportunity in front of him.

Bone sat me down one day and was like, “You need to go get your name out there. Go to open mics, do whatever you can,” he encouraged. “Work on your show, work on your stage presence.” It was on from there, as Sean took his future into his own hands and never looked back. Since stepping out on his own he’s learned the value of self-dependence. “I look at my career as a child,” he explains. “Nobody is gonna take care of your child like you’re gonna take care of your child. I have people help out, but ultimately it’s on me at the end of the day how far my career goes.”

As of now, it can go wherever he chooses to take it. From juggling gigs as an MC and host, to ambitions to get into acting, writing and producing, the man known to “Be Everywhere” also wants to do everything he can while he has the chance.

But no matter what he’s doing, what really drives Falyon is the real-life connection he creates with fans. “I love performing,” reveals Sean when asked what he likes most about his job. “I just love being on stage and performing for people. It’s just a dope feeling to be able to reach people with music.” After every show, he goes into the crowd to parlay with the people no matter how large of an audience. “Just to let them know,” he explains, “Yo, I’m out here.”

And they welcome him with open arms. Whether it’s his rhymes or his uniquely genuine personality, they just can’t get enough of Falyon. “I feel that people are just comfortable around me,” he says of his mysterious magnetism. “I’ve had this problem since I was a kid. I could never not make friends.” Or could it be the beard? “My beard is a magnificent accessory,” he explains. “It’s just something awesome for everybody to gaze upon— especially the ladies.”

Those looking to find the future of Hip Hop should keep gazing at Falyon and his beard through 2013. Since being named by Complex.com as one of Atlanta’s 10 artists to watch, Falyon has been on a roll, his career gaining momentum with each new release. He’s had his videos played on MTV2 and MTV JAMS and shared the stage with Janelle Monae, Big K.R.I.T. and B.o.B., but those accomplishments are just the beginning. With no plans of slowing down anytime soon, it won’t be long until Sean Falyon is loved everywhere without having to go anywhere.