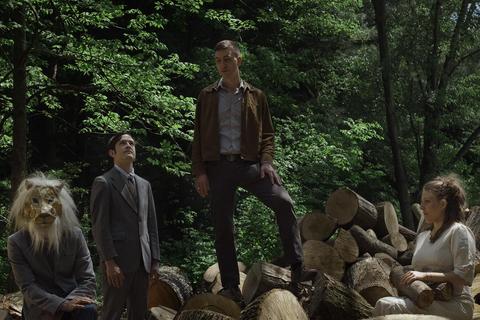 Judson Claiborne is an American rock band founded in 2007 by singer / songwriter Christopher Salveter and multi-instrumentalist, Ryan Boyles in Chicago. The two met toward the end of Salveter’s previous band, Low Skies and Boyle’s previous project, High Hawk. Stuart Berman of Pitchfork, in his review of Low Skies’ final record wrote that the band resembled “the sunstroked stumble of Crazy Horse (c.f. "Cortez the Killer") and the Dirty Three's desert-dragging dirges” and “Salveter's distinctive vocal, a death-bed confessional tremble that doesn't so much suggest a lump in his throat as a tumor”. Low Skies released three records on the Flameshovel label and toured extensively, notably as support for Neko Case, Band of Horses, Okkervil River, Explosions in the Sky, and The Handsome Family.

The first Judson LP, Before Midnight Scholar, self-released in 2008, represented a new musical vision apart from the Low Skies oeuvre. Its songs have a vaster emotional landscape, making room for playfulness and celebration. The album was mostly conceived on Salveter’s bicycle throughout a tour of Southeast Asia. The record howls reverent delight, but it’s not without a few deep laments for lost friends and lovers. Mark Guarino wrote the following for No Depression, “Before Midnight Scholar has a dreamy quality, though underneath the sophisticated textures of country mysticism is a steely edge that suggests a bottom dropping out at any moment. While the music is continually seductive, its core appeal is Claiborne’s voice, which is as nuanced and filled with tremors as those of Rufus Wainwright and Jeff Buckley”.

Time and Temperature, the band’s second LP was released in 2010 by Pennsylvania label La Societe Expedionnaire. The album represented a clear progression into an atmospheric rock band with full on grooves, a string quartet, and a horn section. Songs from Time & Temperature were licensed for use in a few independent films and the JC band began spending more time on the road, supporting bands like Lower Dens, Iron & Wine, Andrew Bird, Grant Lee Phillips, The Cave Singers, Marketa Irglova, and Cass McCombs. Pete Zimmerman of the Huffington Post named the record, “One of the top ten Chicago albums of 2010 that isn’t Kanye West”.

Salveter completed training and certification as a Yoga teacher in early 2011 and relocated to the Pacific Northwest with the intention of writing some new songs. Not but 6 months later, Salveter returned to Chicago to begin arranging and recording for what will be the band’s third LP, We Have Not Doors You Need Not Keys. Salveter raised money through Kickstarter to pay for a substantial amount of the album’s production, offering donors everything from handmade bath salts to instructions by phone on how to perform the Heimlich maneuver. Marketa Irglova of the Swell Season contributed vocals to the album as well as members of Early Day Miners, Low Skies, Angela James, and Darts & Arrows. The album was recorded and mixed in studios and rented houses in Chicago and Michigan by Tim Iseler who has been the band’s engineer for their three LPs. Doors will be released Summer 2013 and JC will be touring throughout this year, including SXSW in Austin this March.