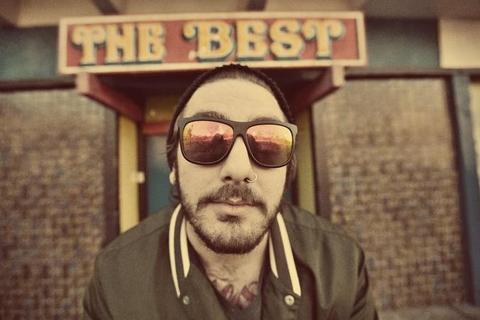 Ashtrobot is an energetic and creative vocalist, super producer, musician and song writer with a deep background in music. He was born in Redondo Beach, California where he started his band, P!stol P!stol, at the young age of 15.
His first serious music project [P!stol P!stol] was a great success with appearances on the Jimmy Kimmel Live show and music featured on ESPN. Due to differences between members, the band broke up in 2009. Since the break-up of his band, he decided to spend countless hours in the studio perfecting his style and sound into what is now the fresh, funky, powerful beats he produces today.
In addition to focusing on production when P!stol P!stol ended, Ashtrobot got a phone call from his longtime high school friend Ali. He asked Ashtrobot to come by the studio and lay down some vocals with an artist he was producing named Kendrick Lamar. Kendrick and Ashtrobot had an instant musical synergy and Kendrick thought Ashtrobot’s voice was very original, he likes that Ashtrobot uses his voice as a musical instrument to add more soul to tracks. Ash was featured on two tracks off of Kendrick’s “Section 80” mixtape, “Keesha’s Song” and “Ronald Regan Era”. After the rest of the Top Dog Entertainment camp heard Ashtrobot’s voice it was a wrap, Ash was TDE family. Ashtrobot has been featured on Kendrick’s “Overly Dedicated” mixtape, and has features on his album dropping this year on Aftermath records. Ab Soul featured Ashtrobot on TDE’s latest release “Beautiful Death” off of the “Control System” album which has been extremely well received. Ash is currently working on his solo project and is in talks with TDE about signing with them for his first solo album release.

The “Ashtrobot” is an outspoken white scum beach bum gangsta hippy producer/rapper/musician on a mission to party as hard as possible, while opening the masses eyes to the control system set in place to keep a select few in power. Ashtrobot is vulgar and disgusting at times, a true tribute to American society and culture. Ashtrobot is an undeniable symbol of alien technology, space travel and psychedelic expansion of the third eye. Ashtrobot recently released his instrumental “SMASHTROBOT” dubstep EP with all the proceeds benefiting a child battling stage-four cancer. The exclusive beatport release charted into the top 50 of the Beatport dubstep EP release chart and was a huge success. Ashtrobot is currently working with a producer, Richie Stites, on an EDM group called Monsta Squad. Richie has worked with many talented artists such as Cee-lo Green, Michael Jackson and OutKast. Monsta Squad is a bass hop EDM project that is launching this fall
Ashtrobot founded D.R.E.A.M. Brigade in December 2009 with the intent of putting on a one-time event. However, after seeing its success and the buzz it created, he quickly changed it into that of an independent label and crew. Be on the look-out for new releases from his label D.R.E.A.M. and the kick off release party, which is slated to be a compilation of D.R.E.A.M. artists and producers.
Ashtrobot is currently focused on finishing up the Live project and the Monsta Squad project. Artist, singer, songwriter, director, guitarist, bass guitarist, pianist, drummer, vocal production, electronic music production, and DJ are all in his skillset; This, along with natural talent, extreme drive and passion, and a strong fan base, ASHTROBOT and his crew are poised to be a creative force for as long as they decide to create music for the world.