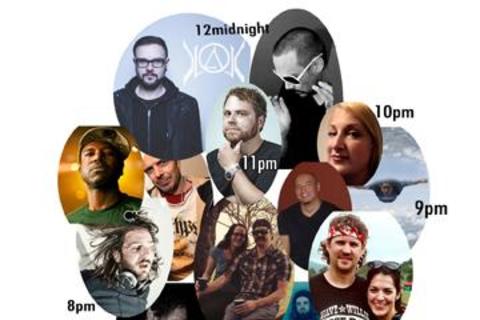 Kloak is the new music project from the artist formerly known as EMU. He was an integral figure in the rise of Los Angeles and US Dubstep and has played most major cities in the US at some point in his DJ career along side the biggest names in the game such as Skream, Benga, Caspa and 12th Planet. His new production direction as Kloak encompasses all genres but his DJ sets are comprised of infectious dancefloor rhythms including house, funky breaks, future bass, and garage.

+++++++
Producer/Philosopher/Photographer/DJ...Spud Crowley aka Crisp Arson...the Legendary Mastermind behind RUN DMT, and founding member of the D.J. Collective, 'Irresponsible Voltron' has left RUN DMT, and Subversive Records, for the Greener, Psilocybin-studded Pastures of...
..."Eye Contact: Maui" for a "Spell"...
...as his Alter-Ego, 'Parson', he produced tracks for Wu Tang Clan's "Enter The Dubstep", 'Ramadanman', and 'Planet Mu'.
...Now navigating new directions as 'Spud Crowley', and rightfully taking it to the next level with his own Record Label, 'Phiral Communications', he has some Special Magic planned for our Premire Remix Gala, due March 2014... — with Spud Crowley.