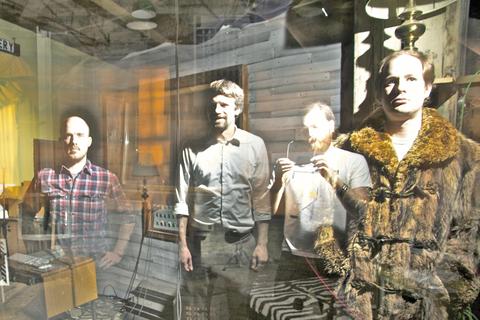 For as long as I’ve listened to music, I’ve been planning the soundtrack for the movie of my life. “Comfortably Numb” scores a pitch black drive through the woods in a 280ZX. A hand selects “Into the Mystic” on a jukebox. A clever scene fades Neurosis into Tangerine Dream, and Fleetwood Mac’s exquisitely-titled “Albatross” is looping through eternal credits. Music is a part of everything, both the product of life on Earth and a dominant ingredient of living in the first place.

But who scores the quick cuts and long stares, those in-between moments that often matter more than anything else? What keeps the pulse of the story of a life? For the past four years, I’ve been listening to All Tiny Creatures. Living to All Tiny Creatures. It began with a demo forwarded over by Chris Rosenau, attributed to Thomas Wincek, a guy I only knew as Chris’s bandmate in the venerable Collections of Colonies of Bees and the brain behind Emotional Joystick, a name that rested in my mind somewhere between Autechre and the Morr Music label. Sure, I’ll put it on. A day later, I’d played the songs no less than a dozen times over. They’d taken root. Some guy in Wisconsin just gets it. Among our extended group of friends, I’d found the music that could stand up to my brain and hold its own. I’d long-loved Harmonia, Ashra, XTC, and King Crimson, like some time-traveler three decades away from her home…but All Tiny Creatures taught me why.

Two years after that first listen, Thomas Wincek multiplied by four: enter Andrew Fitzpatrick, Ben Derickson, and Matthew Skemp. Hometapes collaborated with the band on the release of Segni, a four-track 12” EP and instrumental thunderclap of skill, theory, and intention. Live performances turned explosive; All Tiny Creatures was evolving. By then, Wincek, along with his Collections of Colonies of Bees bandmates and Bon Iver frontman Justin Vernon, was now a force behind the band Volcano Choir. With a mind stretched across projects, not to mention life with a young family in Madison, Wisconsin, Wincek seemed to run on some hidden aquifer of ideas and energy. It was just this accretion, like gasses swirling in outer space, that brought the band to critical mass in the shape of 2011’s Harbors.

Harbors, like any great album, defines its artists and has the power to further define its listener. It’s meticulous and soulful. The building blocks of the record, like Segni, were whittled from looped and freestanding sounds democratically created by synthesis, guitars, and percussion. But as the needle glides into “Holography”, the swift and playful start of side A, there’s a new kind of compositional poise. Harbors is an album of transformative repetition, of music that travels freely between the left and right brain. It pulls from the same well (with a new bucket) as their Krautrock and Minimalist forebears (guys like Steve Reich, Terry Riley, and Manuel Göttsching) and even the greater history of rhythmic percussion found the world over. And then there’s one entirely new instrument for All Tiny Creatures: the human voice.

All Tiny Creatures introduce vocals on Harbors, adding a new dimension to their sound as well as to their entire creative process. As songs began to take shape, they were shared with a close (and very talented) group of friends. These were instruments that could talk back. Joining All Tiny Creatures vocalists Thomas Wincek and Andrew Fitzpatrick are Justin Vernon (Bon Iver), Roberto Carlos Lange (Helado Negro & Epstein), Phil Cook, Brad Cook, and Joe Westerlund (Megafaun), Ryan Olcott (12 Rods, Mystery Palace), Matthew Byars (The Caribbean), and Jennifer Fitzpatrick (a scientist and Andrew’s wife).

This mix of control and community is audibly liberating, balancing what it means to take the primitive urge of music and to push it through machines. The result is just downright beautiful. All Tiny Creatures captures the mood of a sunrise, the hum of a factory line, and the swirl inside your mind, all at once. Harbors honors a whole era of musical history, and, as you nod your head to the beat, writes a new chapter, all its own. This is truly modern music.