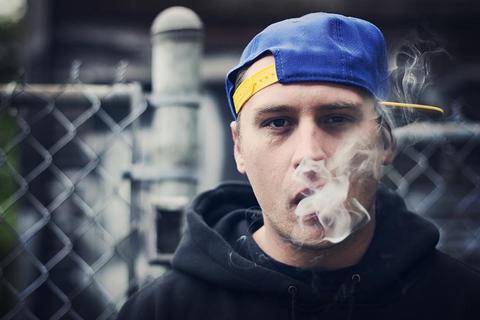 Snak The Ripper raps with a voice as raw and honest as his material. In just three years, Snak has gone from rock-bottom anonymous, to internet superhero. Snak has garnered millions of YouTube views, solo tours across Canada and Europe as well as support slots with the likes of Tech N9ne, Yelawolf, The Beatnuts, Raekwon, Onyx, and Swollen Members to name a few. Snak won the “Best Hip Hop Artist” award at the 2011 Urban Culture Conference Awards in Canada determined solely by online fan voting.
Snak The Ripper is the newest member of the 100 MAD, a crew of rappers founded by Fredro Starr and Sticky Fingaz of legendary New York rap group, Onyx. In addition he’s a flagship artist of street wear brand Ephin Apparel and the spokesperson for the 50,000+ subscriber strong Stompdown Killaz graffiti crew; recently featured in legendary street artist Banksy’s Oscar nominated documentary “Exit Through the Gift Shop.” His live show has been described as a “shocking real life nightmare thrill ride.” (Exclaim)

He’s already infamous in North America and Europe and he’s just getting started. Snak's group Brass Tacks (with Evil Ebenezer & Young Sin), were the only rap group invited on the Van's Warped Tour 2010, where they performed for crowds of up to 20,000 people each day. Brass Tackz debut EP was his label, Camobear-Digital’s, top seller and one of HipHopCanada.com’s most downloaded albums of 2010. On Dec. 31st 2010 Snak released his free mixtape, Fear of a Snak Planet, which garnered over 50,000 downloads within a month of release. His latest release, White Dynamite, is by far his most successful project yet. Snak has built a loyal following of almost 30,000 Facebook fans and 10,000+ Twitter followers and counting. Snak finished 2011 with a relentless tour schedule making stops throughout Europe, Canada and the USA. Snak is the official MC for Dubstep all-star Datsik. Their smash single “Fully Blown,” was released January 31st 2012 on Dim Mak Records. Snak’s voice is his weapon of choice and your ears are his target.