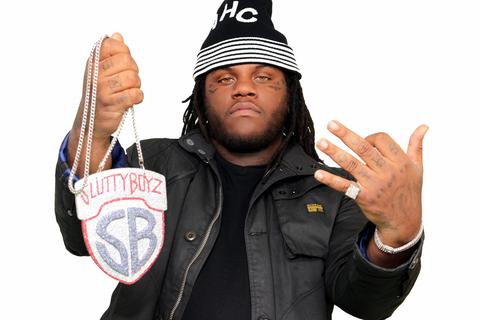 Press play on a Fat Trel record and you know you’re listening to the real deal. No stranger to the streets, the DC-bred emcee boldly meshes his clever lyrical talents with captivating storytelling embedded in his reality. Now a part of Master P’s “Louie V Mob” and slated to release a new mixtape this year, Fat Trel’s rise to fame is unstoppable.

Born in Danville, VA and raised in Washington, DC, Fat Trel took an interest in the art of rap at age 10, learning to write and record his own rhymes in his cousin’s studio. Influenced by the likes of the Hot Boy$, Geto Boys, Scarface, Rick Ross and his hometown famous go-go music, the budding artist meshed an East Coast sound with a down South touch. As a teenager, Fat Trel made music just for fun after dropping out of high school and taking to the streets to provide for his family. But, a major turning point in his life came in 2009 when he was shot and wounded by his childhood friend during an unexpected altercation. The incident, which left him in a hospital and on bed-rest for several weeks, changed his outlook on life. From that moment on, Fat Trel decided to take his musical talents seriously and never looked back.

It wasn’t long before he made a name for himself freestyling at crowded open mic sessions throughout DC. His effortless storytelling ability attracted hometown fans and even the attention of the local radio stations 95.5 and 93.9 FM. His buzz eventually reached fellow DC recording artist Wale who quickly signed Fat Trel to his Board of Administration label and gave him a feature on Wale’s popular More About Nothing mixtape, launching the new artist onto the national stage. After later parting ways with Wale, the rising star dug deep into the trenches and continued writing, recording and putting out music – gaining more fans and exposure in the process.

He reached a benchmark of success in 2011 with the release of his street anthem “Respect With the Teck,” produced by hitmaker Lex Luger, sending his career over the top as an independent artist. The music video garnered over 1 million YouTube views, solidifying his position at the next level in the industry. He was tapped to perform with the likes of Juicy J, Smoke DZA, Joey Badass, Short Stop, Cassius Green and Chevy Willis, with his growing celebrity landing him meetings in LA, NY & ATL with every record label. However, none of the offers stood out to him or at the time and he chose to remain independent.

In 2012, Fat Trel released his new mixtape Nightmare on E Street featuring artists like Kirko Bangz, Red Café, Ricky Hill and Big KRIT and also teamed up with Chief Keef on the banger “Russian Roulette.” Even with a growing fan base across the country and an increasing respect in the industry, Fat Trel was surprised to receive a personal call from one of his idols Master P. The rap icon flew Fat Trel to LA and inducted him into Master P’s “Louie V Mob” along with fellow upcoming artist Alley Boy. The group will release a highly anticipated mixtape this year and are working on several new business ventures. “We’re slowly working on something bigger than we’ve ever done. It feels good to be a rapper right now,” notes Fat Trel.