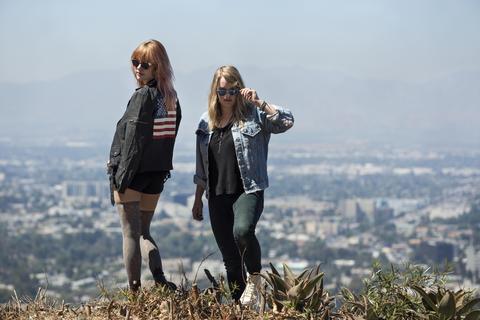 Listen to Think Of You

On the heels of three well-received singles comes Ride Your Heart, the bombastic debut album by LA band, Bleached, out April 2 via Dead Oceans. Sisters Jennifer and Jessie Clavin match their ability to blend a mix of freewheeling '77 punk with vintage sunny Southern California melodic rock and roll; creating blindingly bright hooks and dark heartfelt lyrics about love, loss, and the crazy fun moments in between. That's the goal: the sugary and sour, repurposed by two aggressively harmonic musicians and songwriters. Their first single "Next Stop" epitomizes this movement - fun, raw, adventurous and free. Tossing you out onto the dance floor, hair mussed from make-outs, cigarette still dangling from your fingertips.

Raised up deep in the San Fernando Valley, their suburban isolation nurtured the girls creativity, as they started making their own music at a young age. Sneaking into punk shows over the hill in Hollywood, they grew up to become teenaged underground staples at all-ages Downtown DIY venue, The Smell. "Me and Jen were punk kids who weren't taught how to play instruments," says Jessie. We taught ourselves how to play, out in the garage." Eventually signing to Kill Rock Stars and Post Present Medium, their all-girl punk band Mika Miko drew international acclaim, landing slots on tours with No Age, Black Lips, and The Gossip.

Bleached originally formed when the Clavin sisters resolved to continue working with each other upon the break up of Mika Miko. Plans were postponed when the sisters joined other bands. Jennifer relocated to New York and toured extensively. With Jennifer away, Jessie began to play with various bands in LA. But in the fleeting moments they found together back home, the songs that became Bleached's early 7" singles came together. Since Jennifer moved back to her hometown, Bleached now serves as both girls' chief creative outlet. "I was going crazy being in someone else's band," remarked Jennifer. "Me and Jessie are so proud and happy to be able to focus on our own music, together."

As a whole, the twelve tracks on Ride Your Heart reveal the many facets of Bleached's music in a delirious vortex of playful harmonies, tangled guitars, and golden noise. Each song brings a new element, while also imbibing the classic moods of bands as varied and iconic in nature as The Ramones and The Cars to The Rolling Stones and Fleetwood Mac. From the syncopated backbeat and two-part chorus of "Dead In Your Head,", the rolling riffs and sparkling melodies of "Searching Through The Past" and the pulsating energy and urgency of "Dreaming Without You" and "Outta My Mind", Bleached take you on a sweeping emotional roller coaster that churns and burns. Ride Your Heart is a thrilling, beating, glorious wall of sound strong enough to withstand its own impact.