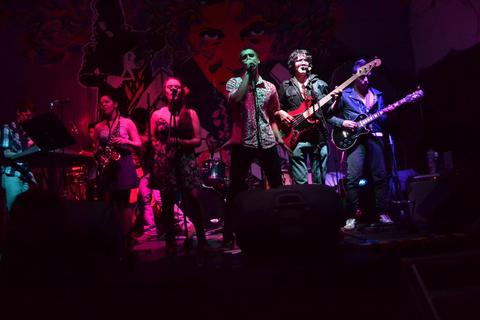 Listen to No le Temo

La Sabrosura Dura is a band of latin fusion music. It draws inspiration from the latin sounds of different times and places in Latin America and some of the black music in North America, such as funk. This unique mixture of genres makes its music something new and innovative that will undoubtedly capture the listener's attention.

During it's 2 years of existence the band has focused mainly on playing in local bars in its hometown of Bogotá, landing, during the process, a spot in the Festival Iberoamericano de Teatro's Carpa Cabaret, a very important venue in our country which only happens once every two years. It receives visitors from all over the world as the festival is the most important, and biggest, theater festival in the region.

Recently the band has been working in their first EP with the producer Ernesto Santos, who has worked as well with some very important musical acts such as Chocquibtown and Monsieur Periné. The result is a mixture of all the elements which makes the band stand out: the vocals of frontman Mauricio Byfield, whose stage act always makes the crowd go wild, dance and jump, the backing vocals by the female flute player Lorena Jimenez, and the different musical influences of this act guarantee a party night no matter when or where.

The show at Flamingo Cantina on Saturday, March 16