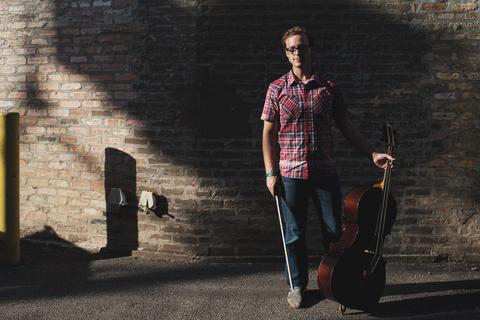 Listen to The Healer

Musicians often claim they are “giving themselves” to their listeners, but it’s rarely as true as on Ben Sollee’s fourth album, Half-Made Man, a revealing, deeply moving album that explores a man trying to figure himself out, just as we all are. Known for his thrilling cello-playing that incorporates new techniques to create a unique mix of folk, bluegrass, jazz and R&B, Sollee possesses rough-smooth-smoky vocal stylings and a knack for intricate arrangements that has brought about comparisons to Sufjan Stevens. Sollee shares himself completely with his audience, whether it be by personal lyrics, or his commitment to the environment. Sollee can often be found riding a bicycle to his concerts (cello strapped to the back), which have become legendary for their intimacy.

The album, produced by Sollee himself, boasts a sublime cast of musicians, including Carl Broemel (My Morning Jacket) on electric/acoustic guitar and pedal steel, Alana Rocklin on bass, Jordon Ellis on percussion, Jeremy Kittel (formerly of the Turtle Island String Quartet) on violin, and guest vocals by Abigail Washburn. Sollee contributes octave mandolin, guitar, and of course, his signature cello.

“I wanted it to have a raw, real-time performance quality,” Sollee says. “This is kinetic expression. I dug deep into myself and asked the musicians to go there with me. To my ear, it sounds like musical search party; we often find what we’re looking for in between defined styles and genres. It won’t be easy to place this in one category, but I, and my generation, are measured by a little bit of everything these days.”

Sollee first gained major notice with his 2008 debut, Learning to Bend, which led NPR’s Morning Edition to call him one of the “Top Ten Great Unknown Artists” of the year. Later, All Things Considered called his debut “an inspired collection of acoustic, folk and jazz-flavored songs, filled with hope and the earnest belief that the world is good.” Around the same time, Sollee was touring the world with Abigail Washburn’s Sparrow Quartet alongside Grammy nominee Casey Driessen and multi-Grammy winner Bela Fleck. Sollee’s music drew the attention of My Morning Jacket frontman Yim Yames, who produced his second full-length album, a collaboration with Daniel Martin Moore. In 2010 they released Dear Companion, a stunning collection of songs meant to inspire environmental stewardship. The next year Sollee contributed his cello stylings to My Morning Jacket’s hit album Circuital and released Inclusions, a sonically awe-inspring album about relationships that was called “structurally brilliant” by Slant and “stunning” by No Depression.

Through it all, Sollee has garnered a rabid following of listeners devoted to his music. They will be greatly pleased with this, his most personal and adventurous album yet. His voice is grittier here, and the instruments—fiddles, lovely in their sawing, and electric guitars grinding out love and disappointment and every emotion in between—mimic the urgency and passion so evident in his vocals. “The vocals are more off the cuff and freer,” he says, stressing that the production strives more for rawness than perfection. “We steered our ears toward getting the right energy for each song. The takes took on their own life and led us along. The machines and mics had a weighty sound that we could use to drive the story through the lyrics and arrangements.”

The songs give us the many facets of a human being who is acutely aware of the world around him and his own faults. The album is novelistic in its scope and theme as we travel with the narrator who reveals everything about himself as a father, a spouse, a musician, and more. We are along for the ride as the narrator sings of selfishness, joy, impatience, romance…being human.

With Half-Made Man, a record of raw power, grace, and wisdom, Sollee is sure to be measured alongside the best artists of his generation.