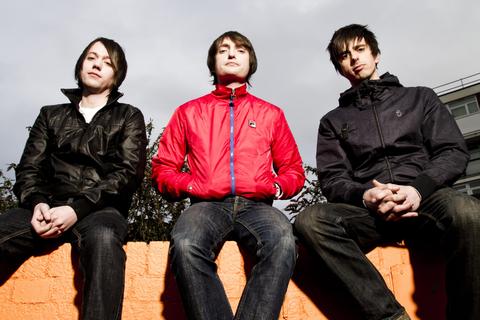 Listen to This Is real

If you could bottle the spirit of THE ENEMY and flog it Coventry, UK might just have an export to rival their proud motor industry heritage.

Frontman Tom Clarke, bassist Andy Hopkins and drummer Liam Watts are back with a ferocious, guitar-heavy and typically anthemic third album.
The band, with Joby J Ford from The Bronx on producing duties, have been in LA rediscovering the DNA that helped a young three-piece from the West Midlands explode into the charts in 2006.

From an initial 30 tracks they have been whittling down, chopping up and polishing songs which has unearthed an explosive collection of new material. They have dipped back into the rich songwriting vein that presented a raft of indie singalong hits when they were still too young to vote.

But these lads don’t need anyone to write a mission statement for their next release, or deliver some flowery talking for them. Frontman Tom knows why the band will always strike a note with fans - it’s top quality, unapologetic rock’n’roll.

“It has been a huge toilet bowl full of sick for a while, there's a load of sh*t in the charts. There is now a proper f***ing hunger for musicians playing proper music on real instruments and singing live. That's what we do and that's what the bands we respect do.”

The first time I met The Enemy was six years ago at a gig in London. A couple of busloads of fans from Coventry had followed them down and caused absolute mayhem at the venue.

Fast forward six years and I’m in Coventry watching them on home turf doing exactly the same again. The band’s passion, and the crowd’s, remains at fever pitch.

The time between has seen the three school friends tick career boxes they are only just beginning to acknowledge and appreciate. Playing That’s Entertainment with Paul Weller at The Roundhouse, with Tom strumming the opening riff, supporting Oasis on stadium dates and selling out the Ricoh Arena in their own right – the list goes on.

“You get something different from this kind of music, it's not the same with the other stuff,” declared the band’s quiet man Liam.

“There's a sense of belonging. What we've made is an absolute no apologies guitar album, it's just a three piece playing and thrashing some guitars out,” roars Tom.

The band spent a couple of days writing and recording with Joby in London at the end of last year to see if they would click in the studio. Within half an hour they knew they had their man.
The lads decamped to California to finish the job during an intense period in Van Nuys, Los Angeles. It wasn’t girls in bikinis at the Sky Bar of the Mondrian either. It was a quiet complex with a crematorium, studio and little else for comfort.

The upshot was some of the best music the band have recorded. Some of the loudest. Some of the most raw, original and heartfelt they have ever produced.

“We wanted to work with Joby from The Bronx,” explained Tom. “Because we know that he can record guitars better than anyone else. We were on a short time scale because we know when we want the album to come out, so we had to crack on. We liked him, he liked us. Then we went over to his studio in LA.”
“There's no bullshit,” admitted Andy. “He's straight down the line and that's kind of how we are. Joby's gone, ‘Your band’s f***ing unique, lets just press record.’”

The band are unanimous in agreement that Joby is the man who has got the best out of them in their studio career so far.

We’ll Live And Die in These Towns and Away From Here, released back in 2007, became anthems for a generation. Andy’s eyes light up at the thought of those fans who grew up with them, who will be entering the next stage of their lives with The Enemy providing the soundtrack once again.

Tom explained: “I genuinely believe this is our best album. I know it is.”

The band are utterly unapologetic about their roots in Coventry. Their connection with the city runs deep, and they could fill the Ricoh Arena with their army of fans with a few hour’s notice. It’s that understanding of their upbringing that has provided the inspiration for the album title.

“There was a documentary called Streets in The Sky on TV about huge tower blocks in Sheffield,” said Andy. “Council housing, like streets disappearing high into the sky.”

“We are proud of being working class, there's beauty and colour and light in life and that's regardless of class.”

“That's the whole point of Streets In The Sky. It’s not just grey concrete, because that's what it is round here, it’s about painting them f***ing bright colours,” adds Tom.

“Part of what we want to do with this album is let people know who we are because you've seen The Enemy as a band, but we're three individuals.

“Liam's a weirdo, Andy's like the biggest piss taker ever, and I'm basically a lunatic.

“But there's three personalities in this band and if the album goes well you want the fans to know who you are. “I think I could sum the whole album up in one line. I think this album is the best representation yet of our band. That's how I feel.”

So how best to explain where the band find themselves away from the studio and live arena?
As always, it’s best to leave that to Tom Clarke.

“I think when you first start being in a band you're young and all of a sudden birds want to talk to you. You know who best summed it up? Peter Crouch, it's fucking amazing. What would you be if you weren’t a footballer Peter? A virgin. That applies to everyone in a band as well.”

“Ultimately drugs will kill ya. Sex gets boring and eventually you just want someone that you love.

“The one thing that remains constant? Rock and roll will never die.”