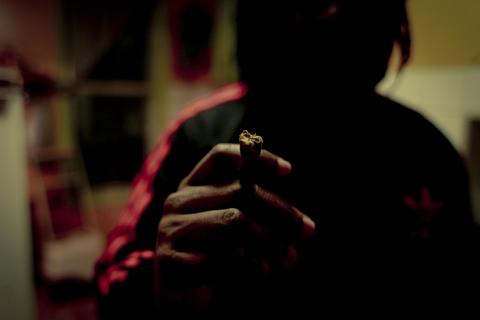 Billy Woods is a rapper who defies easy categorization; he claims Washington D.C. as his hometown but has spent much of his life in New York City. He was born in the U.S. but spent much of his childhood in Africa and the West Indies. Woods released two solo albums, Camouflage (with Vordul Mega of Cannibal Ox) and The Chalice, before working on collaborations as part of the super group The Reavers and as one half of the now defunct Super Chron Flight Brothers . Determined to come back with a new sense of purpose and style, Billy Woods dropped the critically album History Will Absolve Me in 2012, garnering praise from outlets as varied as the LA Times, the Village Voice, and The Needle Drop, while landing on year-end "Best of" lists everywhere.

Never one to rest on his laurels Woods' latest project is a full-length collaboration with NYC producer Blockhead (Aesop Rock) called Dour Candy, set for a May release on CD and vinyl. The new tape finds him in his element; rapping over hard-edged beats anchored in hip-hop but pushing boundaries in their final incarnations; rhyme schemes that stretch the English language like silly putty but always seek to actually say something intelligent, yet devoid of polemics and self-righteousness.

The show at Scoot Inn on Thursday, March 14