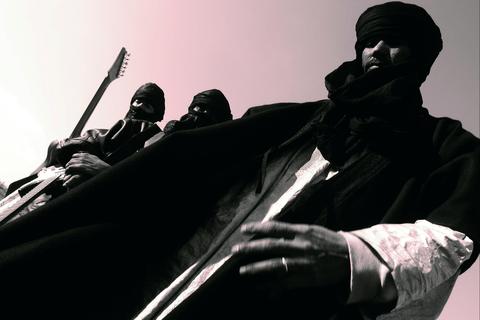 Terakaft (meaning "caravan" in Tamasheq) is a genuine desert rock band, sculpted by the pure searing air and the endless rolling sands of the Sahara. The stark, harsh conditions of the Sahara have permeated their wild riffs, and as a result Terakaft are the perfect embodiment of all that is wild and free in desert blues today. They have taken the electric guitar and made it their own.

Terakaft was formed in 2001 by Sanou Ag Ahmed, then based in Kidal, Mali with Kedou Ag Ossad. Kedou was a member of the original line-up of Tinariwen (four of Kedou’s compositions are embodied on their first international release "The Radio Tisdas Sessions").

Liya Ag Ablil (aka Diara), Sanou’s uncle, joined the band in 2006. Diara was also an original member of Tinariwen and was known for his fierce and passionate style of rock’n’roll guitar playing. He played with Tinariwen for almost 20 years, but stepped back just before Tinariwen started touring internationally. He’s still a close friend of Ibrahim "Abaraybone" Ag Alhabib, and played on Tinariwen’s last album "Imidiwan : Companions"

Terakaft’s roster of songs were mainly written by Diara and Inteyeden Ag Ablil, Diara’s brother. Inteyeden was a Touareg legend and he and Ibrahim "Abaraybone" Ag Alhabib, were co-founders of Tinariwen. Inteyeden passed away in 1994, but his influence is still felt and heard today in the music of Tinariwen and Terakaft. The more modern sounding Terakaft tracks have been written by Diara, Sanou and Abdallah and have a more "pop" sound in the true sense that it is "popular" music, listened to and sung every day by Tamasheq youth.

Terakaft are a band that must be seen live. The perfect mix of two rhythm guitars (one keeping the beat effortlessly, the other soaring and sweet) and the deep tones of the bass, bringing to mind the delicate but strong steps of a camel making its way through the wastelands, will send you on a journey to the deepest heart of the desert, from which you’ll never want to return.

Released in August 2012 by World Village and distributed throughout the world by Harmonia Mundi.