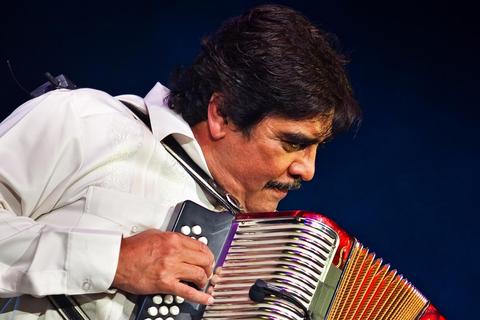 With nearly two dozen albums to his credit, singer, composer and accordionist Celso Pina is known for his pioneering experimentation with the tropical style, the Mexican version of cumbia popular since the 1950s. He's been hooking it up with all kinds of urban and popular styles from nortena and sonidera to rock, reggae, and hip-hop. His massive 2001 hit, 'Cumbia Sobre el Rio' featured in the soundtrack of the film Babel created a whole new hybrid of cumbia and electronica. Since then, he's made successful collaborations with artists such as Lila Downs, Control Machete, El Gran Silencio, and Alex Lora while constantly touring at home, Europe, Africa and in the Americas with his group, Ronda Bogota.