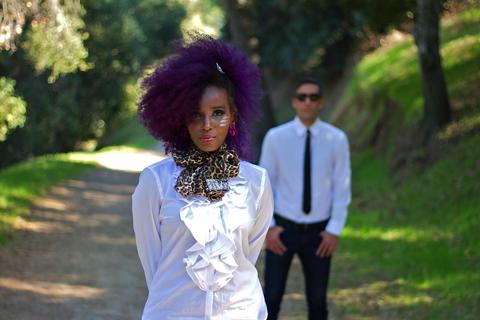 Esprit De Corps is a new, Los Angeles-based music group focused on creating reggae/soul music with an 80’s-style influence. Taken literally, the term “Esprit De Corps” refers to the ability of a group to maintain pride, loyalty, morale and fellowship to an institution or oneself and others. The new band, which promises a fresh, unique spin on reggae music, was founded in 2011 by Fred Card and Shock Mama Cherry.

Card, a Brazilian-born guitarist who now lives in L.A., started playing in reggae bands back when he was in high school. By his senior year, he was already recording songs and playing gigs with Jamaican star Earl Zero. Over the years, Card has worked with Junior Kelly (he produced “Lots of Herbs”), Sizzla, Anthony B., Michael Rose, Tanya Stephens, Gregory Isaacs and Buju Banton. Most recently, he has written and remixed songs for Bassnectar, and is now part of the production team at Fulton Yard Unlimited, which just produced the first single off of Earth Wind & Fire’s new Greatest Hits album. Card’s role in Esprit De Corps is as multi-instrumentalist, songwriter (music/arrangements) and co- producer.

Shock Mama Cherry’s early roots were in the heart of Brooklyn, where she began writing poetry and music at the early age of 10. By the age of 16, she was signed to a record label and began writing, recording and performing soul music on a much broader scale. Since that time, Cherry has been working in and around the music industry in a variety of capacities (including writing for artists such as Jaheim and Dwele) and has even delved into modeling and acting. She was introduced to Card in 2010 by producer/engineer Neal H. Pogue, and their mutual love of reggae sowed the seeds for Esprit De Corps, where she is lead vocalist/songwriter (lyrics/melody).