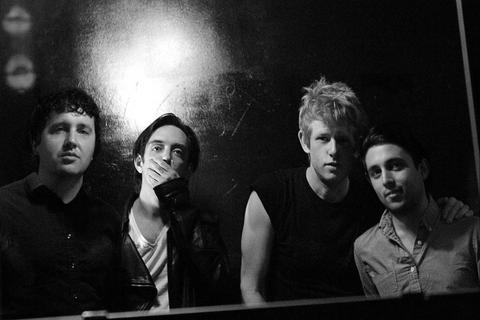 The formation of Divine Fits can be traced back to Britt Daniel attending a Handsome Furs show in 2007, seeing Dan Boeckner milling around and looking like like the type of guy that would talk to strangers. Britt acted on this assessment, telling Dan he possessed one of the best rock n’ roll voices he'd heard. A flattered Dan upped the ante, telling Britt he'd been an ordering-singles-through-the-mail level Spoon fan since high school -- and more than that: that mail order Spoon single had inspired Dan to quit the Metallica cover band he'd been playing in and singlehandedly set him on the path to his future life in Wolf Parade and Handsome Furs. (Before you read any further: Spoon is still very much together, Handsome Furs is not. And that's all there is to say on both of those points.)

The two kept in touch, emailing, phoning, hanging out whenever they were in the same town, and even sharing stages -- most notably Spoon's historic March 2010 headline at Radio City Music Hall, where the capacity crowd was treated to a one-time-only double shot of mutual appreciation: a cover of Wolf Parade's "Modern World" with Dan on guitar and vocals, followed by Dan remaining on stage to contribute additional guitar to Spoon's own "I Saw The Light."

Fast forward to 2011: Britt emailed a demo, Dan added vocals in his kitchen—and thus was born the first Divine Fits song: “What Gets You Alone”—which appears on the album with the original kitchen vocal still intact. Several months later, in November 2011, Britt and Dan had their first rehearsals, rounding things out with New Bomb Turks drummer Sam Brown, who came by way of Spoon producer Mike McCarthy's recommendation. As the trio began its first rehearsal in the spot they’d rented in Los Angeles' Little Armenia neighborhood, Dan’s first thoughts were “finally a band where I can just lay in and play one note.”

In January of 2012, Dan moved in with Britt and the two wrote the batch of songs that was to become A Thing Called Divine Fits. By March the band was recording with Nick Launay, the dream producer candidate for the band based on his three decades of work, including Public Image Ltd.'s The Flowers of Romance and The Birthday Party's Junkyard in the '80s up through his last few years producing multiple Yeah Yeah Yeahs, Grinderman and Nick Cave & The Bad Seeds albums.

Top notch indie rock pedigree or not, A Thing Called Divine Fits (named for the opening lyrics to most of Sister Nancy's repertoire) is a stellar debut by any measure -- from irresistible uptempo hook-fests "Would That Not Be Nice?" and "Like Ice Cream" to the cool Motorik pulse of "Baby Get Worse" and "The Salton Sea" to the tender acoustic guitar strains of "Civilian Stripes" and the sublime take on Roland S Howard's "Shivers."

The show at ACL Live at the Moody Theater on Tuesday, March 12