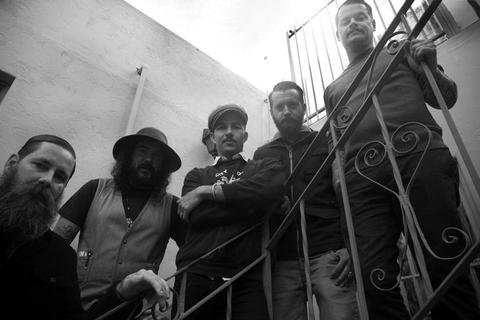 When The Drowning Men formed back in 2006, the product of a childhood friendship between Bardeen, Dolan and Eisenkerch, the idea wasn’t to make a career, but to make music. The band, who added Messer and Smith into the mix, musicians who were equally instrumental to the formation of the group, practiced at least three days a week and a self-released an EP, Kill the Matador, in 2007. The group’s debut album, The Beheading of the Songbird, followed in 2009, again released on their own. Bardeen, a prolific songwriter who is always penning new tunes, was ready again with new music by 2010, encouraging the band to begin work on what would eventually become their second full-length, All of the Unknown.

Initially intending to record an EP, the group headed into Hurley Studios in Costa Mesa, CA in January of 2011 where they recorded five new tracks with producer Billy Mohler (Macy Gray, Jimmy Chamberlin Complex). In the studio Mohler became like the sixth band member, helping the musicians expand upon the tracks they’d been working on. “He brought a lot to the table,” Smith says. “Billy is an amazing communicator. He thinks really fast musically and he’s great at hooks and choruses. He would just do really simple things to make a good song great. He could give the song exactly what it needed all along.”

In the studio it became clear that The Drowning Men were actually crafting tracks for their second full-length, but before they had time to write and record additional songs touring opportunities poured in. The group spent the rest of 2011 on the road, opening for Alkaline Trio, Airborne Toxic Event and, most notably, Flogging Molly, who liked the band’s music so much they signed the group to their brand new label Borstal Beat Records. The label re- released The Beheading of the Songbird and sent them back into the studio in early 2012 to finish its follow-up.

The second session for All of the Unknown took place Main + Market in Venice, CA on and off during January and February 2012, again with Mohler at the helm. Here the disc began to take a more complete shape, driven by Bardeen’s clear-minded songwriting intent. “I had visions for each song individually,” Bardeen says. “For the whole album I wanted to set a mood that’s constant throughout the whole thing. I wanted to capture unique moments of feeling.”

The resulting album, which was completed in April, embraces this sensibility, but also juxtaposes that feeling with a spirited musicality that offers temporary respite from the loneliness. From the visceral introspection of “I Am the Beggar Man,” which Bardeen says “captures us as a whole, musically and lyrically,” to “Lost In a Lullaby,” the disc’s first single, which Smith describes as a “solid song that’s us,” All of the Unknown pulls in a vast range of influences and stylistic tendencies. Bardeen’s love for songwriters like Leonard Cohen and Nick Cave culls together with the wide-reaching musical backgrounds of his bandmates, allowing the songs to become expansive and indefinable.

Now it’s clear that by making music The Drowning Men actually did make a career. Their gritty, thoughtful tracks revel in originality, something that is simply the product of five musicians creating something as one. All of the Unknown inflates this further, evolving the music from the group’s past releases to embody grander choruses and involve bigger musical payoffs. But as the band prepares to tour extensively on the new disc, the music is still the underlying motivation. “I just want to write songs and play them,” Bardeen says. “Hopefully people like them. But if they don’t, I’ll still write them and we’ll still play them.”