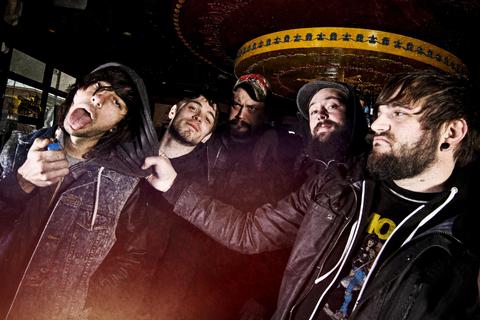 Listen to Leaderless and Self Enlisted

With their fifth full length studio disc and first for Razor & Tie, Atlanta’s post-hardcore giants Norma Jean have delivered what many will come to regard as the heavy music album of 2010. Building on the sonic bedlam that has already earned the group an ever-swelling and tremendously loyal global following, Meridional is the aggressive, artful follow up to 2008’s widely acclaimed studio effort The Anti Mother.

Launched by the walloping opening track and advance digital single “Leaderless and Self-Enlisted,” Meridional isn’t your typical blasting material. It’s a seamless song cycle – and a loose acknowledgement of the heralded quintet’s Southern roots – that incorporates an array of dramatic, melodic and experimental surprises.

If the ferocity, velocity and weaving melody that steers that aforementioned leading number incites and inspires, it’s perhaps the ideal representation of what Norma Jean has become known for – unrelenting, innovative and exceptionally good songs. When pressed to explain how the band keeps managing to up its game with each successive studio effort, longtime lead vocalist and guitarist Cory Brandan modestly addresses the peerless end product that is Meridional.

“We have all become very comfortable as a team of writers and musicians,” Brandan explains. “More and more as we continue to create we become less of a band and more of an artistic collaborative.”

“We started to write this one well over a year ago, which really gave us time to sit with certain songs and ideas,” adds drummer Chris Raines. “We really took our time and so much was able to happen. Songs got better, relationships got better, ideas came faster – it really went great.”

That creative preparedness was essential in rendering what can only be regarded Norma Jean’s most diverse and cohesive disc yet. From the sinister, percussion-driven standout “Deathbed Athiest” – which highlights Raines’ pummeling wares – to the amazing, alluring hard rock anthem “Falling From The Sky: Day Seven” Meridional reflects Norma Jean at its most accomplished and adventurous.

“We wanted to make something different, but something that really flowed together,” Raines says. “We didn’t want to have our record sound like 10 different bands.”

Although “Falling From The Sky” and the stirring, memorable bruiser “High Noise Low Output” build slightly on the melodic touches first surfaced on The Anti Mother, these Ozzfest and Warped Tour vets are by no means pondering a radical reinvention.

“We all like different kinds of music and that is always going to come through,” Cory explains. “Besides they’re hardly what I would call hits – that wasn’t the intention – but they are songs that we feel are very important to keeping the record from being boring and monotonous.”

On Meridional Norma Jean also sidestepped the same-old, same-old by opting to work with producer Jeremy Griffith (a veteran of records by Saosin and The Cartel) after two acclaimed discs (2006’s Redeemer and 2008’s The Anti Mother) with esteemed metal guru Ross Robinson. At Raines’ suggestion – he has known Jeremy for a number of years – the band and the rising producer tested the waters on a demo of the song “Kill More Presidents.”

Although that track was ultimately left off the album, the drummer says, “We loved the way Jeremy worked and the sounds that he got. He is really picky about who he works with and I really liked that about him. He totally gets the idea of a "dark" record and he helped us accomplish that.”

“He’s a really laid back guy,” Brandan interjects. “He jumped right into our vibe of writing and recording.” In fact, Griffith – an accomplished singer who also added backing vocals to Meridional – brought a number of unique ideas to the table. Jeremy challenged Cory, Scottie Henry and Chris Day track their guitar parts before Jake Schultz did his bass parts in the studio – an unconventional idea that paid huge dividends.

“It made it a lot easier to change notes during tracking without having to follow what was already tracked by bass,” Cory says of the fresh method. “It worked really well and it left the record open to lots of different perspectives as we tracked.”

Such innovations elevate Meridional to a new level in post-hardcore. Balancing the haunting interlude of “Septentrional” against the brutal, careening mayhem of “Blood Burner” the band offers an unexpected break from the intensity, setting a distinct mood on Meridional that is rarely achieved in the genre. “There are a few instances like that on the record and we tried to keep them separated to keep a certain flow going,” Cory says. “Those tracks have something very special about them that will be a fun discovery for fans.”

On the ferocious and unforgettable anthem “The People That Surround You On A Regular Basis,” Norma Jean asserts it can craft music that is equally infectious and maniacal. Another highlight is “Anthem of the Angry Brides.” With its frantic guitar noodling, skull thrashing rhythms and bark psychosis vocal delivery, the band knew it had a keeper. “We basically just wanted the song to be ridiculous the entire way through,” Cory says. “It was a fun song to write.”

If its predecessor was a bona fide concept record, Meridional takes a less stringent stance. Teaming with provocative, renowned Starving Eyes artist Jason Oda – who nailed the layout for Meridional – Norma Jean aspired to integrate the theme of the record. Although this time out, the band is hesitant to disclose the premise of the project, which developed during the course of writing and recording.

“We really can’t wait for our fans to get the record and see the artwork that goes with the theme and the title and interpret it on their own,” Cory explains. “Any concept is usually applied rather than calculated. We feel like it all comes down to the listener. Just as one person may interpret a painting differently than another person, we like that our fans may get something different than what we originally intended.”

As for its creative expansion, Norma Jean – who will head out this summer on the Rockstar Energy Drink Mayhem Festival with Korn, Rob Zombie, Lamb of God and Atreyu – continues to dig deeper and go further, a practice which first started with 2005’s O God, The Aftermath. But if Meridional sounds like a game changer in the metalcore realm, it didn’t come without concern for its audience.

“With this record we asked ourselves ‘What can we give?’” says Cory. “We just wanted to give something back to our older fans that have stuck with us through the years. But we didn’t repeat ourselves.”

When it came time for the members of Norma Jean to hear the final, completed sequence of Meridional, Raines says the band was elated. “Honestly, we felt proud,” the drummer says. “Proud of this band and everything we have gone through in the last few years. We really did what we wanted to do and it showed.”

“It’s a very different Norma Jean on this record,” Brandan decrees. “We definitely kept it heavy, but it’s a new kind of “Norma Jean” heavy.”