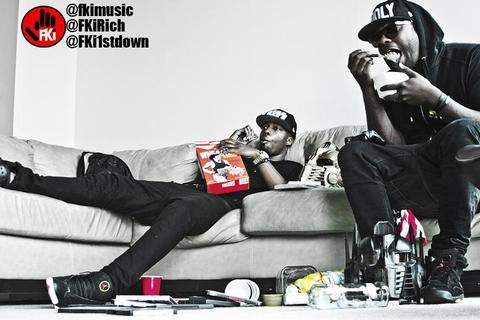 FKi, comprised of Raye Rich and 1st Down, is a hip hop duo out of Atlanta, GA. Not only are they artists they are highly acclaimed producers.

FKi began to get their productions placed with various artists, such as Travis Porter, Ludacris, Iggy Azalea, Cash Out, Tyga and more gaining them even more popularity. Before they knew it, the two were doing shows all over the United States which included the opportunity to showcase their talent at A3C in 2011, SXSW in 2012, and joining A3C for another go round in 2012. 1st Down was even invited to join the producer’s panel during A3C 2012.

FKi’s sound is definitely a heterogeneous sound of glitch hop, hip hop, bass and trap music. This sound was completely revealed in their mixtape Tranformers N The Hood Presented by international DJ/sound curator Diplo, Atlantans Heroes x Villains, and Mayhem [Feb. 1, 2012]. FKi are due to release a follow up mixtape to TNTH early 2013. This is only the beginning, but so far FKi are a force that can’t be stopped.