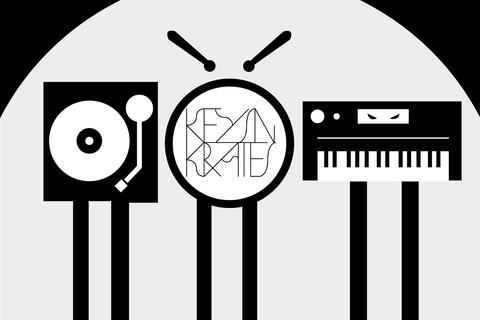 Keys N Krates formed in 2008 out of a desire to do something different. They wanted to take the remix/electronic sound out of the studio and onto the stage, creating a new live electronica experience. The Toronto-based trio – comprised of the high-energy Adam Tune on drums, synth-master David Matisse on keys, and internationally award-winning Jr. Flo on turntables – began by locking themselves in a rehearsal room for six months to create and finesse their unique sound and identity.

The result? A blend of hip-hop, electronica, and jam that truly shows off the artistry of the live remix. Keys N Krates collage raw samples and twist them with live instrumentation, creating a unique party sound. With two live off-the-floor mixtapes and a slew of official remixes under their belt, the outfit is set to release their next EP “So-Lo” on Dim Mak Records in 2013.
Over the last year, KNK toured with and played alongside artists including; Pretty Lights, Lotus, Skrillex, Girl Talk, Kid Cudi, Metric, Timbaland, Zed’s Dead and more. In 2012 the band continued to make an impact on the festival scene, playing major shows at Wakarusa, Ultra Music Festival, Movement Festival, Osheaga and Sonar in Barcelona. The band also produced several hype machine chart topping remixes for Bassnectar, Adventure Club, Zeds Dead and Nelly Furtado.
To really grasp what Tune, Matisse, and Jr. Flo bring to the stage, you have to see it up close. Their shows are filled with high-energy sets that are made to be witnessed live. The guys continue to craft and grow their sound and style, exposing audiences worldwide to the Keys N Krates experience.