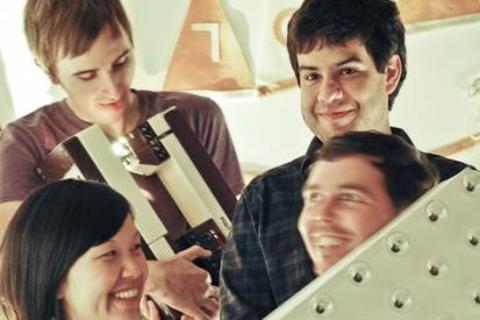 What does it sound like to be in love?
Gold-Bears formed in 2010 when Jeremy Underwood recruited a few friends to play songs he’d stockpiled since the demise of his former band, Plastic Mastery (555 Recordings/Magic Marker Records). The band quickly released a smashing 7” on Magic Marker Records, recalling the immediacy and urgency of Boyracer or The Wedding Present melding with the pop sensibilities of Slumberland contemporaries like Summer Cats and The Pains of Being Pure at Heart. They expanded their sound a bit on their next release (a 4-song 7” on Miami-based indie pop imprint Cloudberry Records) by stripping away some of the fuzz on one song and adding drone elements a la the Microphones to another while still maintaining their indie punk roots.
After hibernating in their home studio for the winter, Gold-Bears emerge with Are You Falling In Love?, an even further expansion of the band’s sound. This 11-song collection of frenzied crash pop, strummy ballads, and syncopated pop dirges is one of the most dynamic indie pop records of recent vintage. In just over 33 minutes Gold-Bears funnels jangly noise pop soundscapes through the energy of Titus Andronicus’ punk anthems, and even manage to give us a few breathers for slower tunes that showcase Underwood's more sincere vocals.
The album kicks off with “Record Store,” a song so full of infectious spirit that it seems like the rhythm section can hardly keep up. “Record Store” segues seamlessly into “All Those Years,” one of the catchiest, poppiest songs in their repertoire. From the initial “ba ba bas” to the sugary sweet harmonies provided by Kristine Capua (Very Truly Yours) you instantly know that this song will never leave your head. Smack dab in the middle of the album is the shoegazey “Are You Falling in Love?,” which bowls you over with a thumping bass line, calculated drumming, guitars that sound like airplanes and bees and lush violins. Toward the end of the album we hear “Xmas Song,” a song about the insecurities of love set to the tune of a crash pop classic, rife with feedback and fuzz that’ll fit nicely on your mixtape following This Poison! or Neutral Milk Hotel, depending on who you are trying to impress.
The 11 songs on this album are brimming with gentle majesty and fervent energy. Whether you follow the stories in the lyrics of the songs or bop around your room to the jangly guitars, this album will surely remain on your turntable for months. Because after all, you have, indeed, fallen in love… with Gold-Bears.