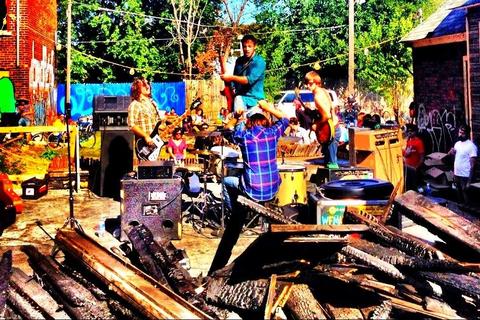 The title of LEE BAINS III AND THE GLORY FIRES' debut album comes from Bains mishearing an old hymn as a child. In the soft accents of his elders around Birmingham, Alabama, "There is a balm in Gilead" sounded a lot like "There is a bomb." It fits, really. The Glory Fires learned to construct music in the churches of their childhoods, and learned to destroy it in the punk clubs of their youths.

As much Wilson Pickett as Fugazi, as much the Stooges as the Allman Brothers, Birmingham, Alabama's Lee Bains III & The Glory Fires have brought rock'n'roll to bear on their own experience and their own place. On 'THERE IS A BOMB IN GILEAD,' they deconstruct the music of the Deep South, strip it down and reassemble it, to make a righteous ruckus that sits at the vanguard of the vernacular.

In 2008, shortly after returning to Birmingham from college in New York, Lee Bains fell in with the Dexateens, a Tuscaloosa institution whose raggedy union of cock-eyed rebel pride and forward-thinking fury proved to be the perfect apprenticeship for a confused Southern boy, raised on Skynyrd and schooled in Faulkner. After Bains had played with the band for a couple or three years, a couple or three hundred shows, the Dexateens came to a reluctant end. Bains found himself off the road, back in Birmingham, without a band. He also found himself with a passel of powerful songs sitting somewhere between buzzsaw garage, classic power-pop and sweating country-soul. Casting his nets in central Alabama's rock'n'roll clubs, Bains assembled the Glory Fires: drummer Blake Williamson (Black Willis, Taylor Hollingsworth, Dan Sartain), bass player Justin Colburn (Model Citizen, Arkadelphia), and guitar player Matt Wurtele. Chugging along with a fierce Muscle Shoals vibe, the Glory Fires brought a sense of urgency to Bains's drawling, howling voice.

After tracking some demos under the powerful guidance of Texas punk pioneer Tim Kerr (Big Boys, Poison 13, Now Time Delegation) and a few months of shows, the Glory Fires traveled to Water Valley, Mississippi to record the tracks for their debut LP 'There Is a Bomb in Gilead' at Dial Back Sound with engineer Lynn Bridges (Quadrajets, Jack Oblivian, Thomas Function). The songs were mixed in Detroit, at Ghetto Recorders by Jim Diamond (The Dirtbombs, The New Bomb Turks, Outrageous Cherry). It is there -- in that Mississippi grease and Detroit grit -- that 'There Is a Bomb in Gilead' sits, fuse lit, ready to go.