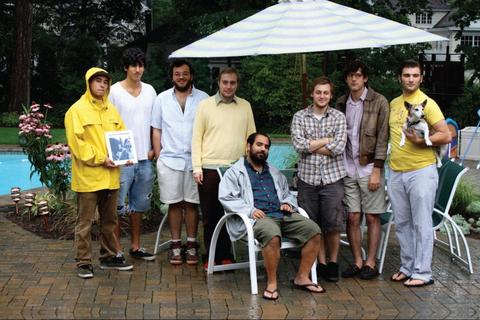 “New Jersey-born Alex Bleeker is an old soul. For his sophomore album, How Far Away, he lets that come into play fully. Over 11 tracks, he deals with the autumnal phase of lost love, the point after the grieving subsides and you start figuring out what you’re supposed to do next. As with his last album, Bleeker cobbles together a ragtag collection of “freaks,” including Mountain Man’s Amelia Meath, who provides gorgeously weighty backing vocals on four tracks, Woods’ Jarvis Tanviere, Real Estate’s Jackson Pollis, Big Troubles’ Sam Franklin, among plenty of other like-minded musicians who lend sparkling instrumental flourishes and a full-bodied backbone to Bleeker’s pained yowl.

Album opener “Don’t Look Down” feels like a mission statement for the rest of the record. Over upbeat guitar jangle and smooth organ runs, Bleeker’s voice cracks and lilts: “Don’t look back on the way we met/ don’t look back at me now/ don’t retract all the things you’ve said/ don’t back out on me.” In the hands of plenty of other songwriters this would come off as self-pitying, but Bleeker just seems wise. The key to How Far Away isn’t just Bleeker’s lyrics, which manage to be both universal and intensely specific, but also the relaxed dynamics of the players. Bleeker is a jam band fanatic, and he takes the core ethos of The Grateful Dead-let things unfold naturally-and distills it into concise pop songs: tracks like “All My Songs” and “Rhythm Shakers” are brief, but they shift from crystaline guitar to weighty bass effortlessly, with Bleeker working as a heartbroken bandleader, keeping things moving organically. Nothing is hurried, but nothing overstays its welcome either.

Though How Far Away is packed with singles, the album works best as a narrative about the dissolution of a relationship. You could call it a breakup record, but that wouldn’t quite be giving it enough credit. Instead, it’s about growing older and figuring out what you need to do to keep moving. It’s never overly sad or angry or obsessed with itself, it’s just true.” – Sam Hockley-Smith