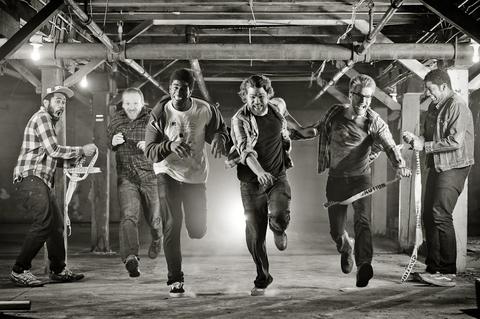 The story of Rough Francis starts in Detroit, Michigan in the early 70's. Three African American brothers—Dannis, David, and Bobby Hackney play in a funk band called Rock Fire Funk Express. The brothers quickly abandon funk and switch to rock and roll after seeing Alice Cooper at the Cobo Arena. The newly inspired Hackney brothers start playing quick-tempo, high-velocity rock and name themselves Death. Heavily influenced by the MC5, the Stooges and the Who, Death unknowingly channel the true essence and attitude of punk… before punk was punk. Fellow Detroit native Jack White sums it up best, “Ahead of punk, ahead of their time.” The band goes into obscurity until…

30 years later, the sons of Bobby Sr; Julian, Urian, and Bobby Hackney Jr., discover the original Death recordings in their parent's attic. Already well steeped in the hardcore and punk scene, the young Hackneys were blown away by the raw power of their father and uncle's music . The three sons joined with friends Steve, Paul and Dylan to create a tribute band to Death called Rough Francis.

Rough Francis started out covering songs from Death's unearthed album "For the Whole World to See". After a few shows, they began to write their own music. Although the loud screams, wild stage antics and maximum volume of Rough Francis echoes Death, they have also crystalized a unique sound of their own. Fueled by 70's proto-punk, Motown, the British Invasion and 80's hardcore, Rough Francis continue to prove themselves as an overwhelmingly powerful force onstage. They have the ability to put all types of audiences in a chaotic frenzy and tame the snobbiest music critics. You dig?

Rough Francis has been featured in the New York Times, Spin.com and Brooklyn Vegan. They have also shared stages with Mos Def, OFF!, Agent Orange, Death, the Jon Spencer Blues Explosion, Fishbone, the Dictators and many others.

You can learn more about the band Death, Rough Francis and the Hackney family in the documentary film "A Band Called Death."