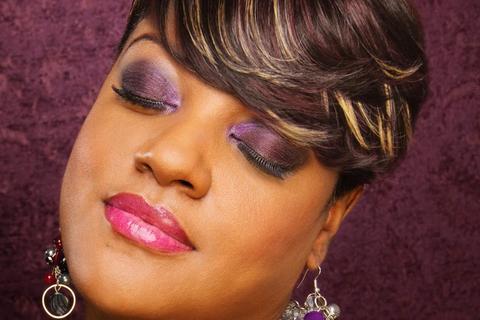 With her debut project, Anita Wilson joins the rich musical heritage known as the Chicago sound, while simultaneously heralding a new style in today’s gospel music---Worship Soul. A worship leader and featured vocalist in the award-winning ensemble Donald Lawrence & Company, she boldly takes the solo stage with an album that is at once fiery and soulful, dynamic and meditative.

From the high-church energy of “It’s Done,” and “He Shows Out,” to the passionate reflection of “Speechless” and “Perfect Love Song,” the striking, 11-song collection is evidence not merely of a great new talent, but of a seasoned minister.

Anita began singing when she was five years old, growing up in East St. Louis, Illinois. Barely in kindergarten, she took her place as a singer in the church her father pastored. To those spiritual roots she added the powerful influence of jazz and R&B singers like Sarah Vaughn, Aretha Franklin, and Stevie Wonder. As a teenager, she studied the masterful vocalists she discovered in 90’s urban music, including Lalah Hathaway, Brandy, and Faith Evans.

Those diverse voices and genres blended to create Anita’s unique approach to song. “I have a different style,” she admits. “It is traditional Baptist, but it’s contemporary too. I have the heart of worship and I’m very laid back. I’m always myself, and God blesses that.”

From the prologue “Have Your Way” to the epilogue “More of You,” Worship Soul beckons the listener to worship with ease, to enjoy a new revelation of God’s presence. Anita’s confident, clearly defined, artistic vision is the outgrowth of a unique journey.

“I was on the fence for a long time about doing a solo project,” Anita explains. “I prayed about it for years and years.” She had settled in her mind that solo artistry wasn’t for her, that she wouldn’t sell millions of records.

Around that time, she had a moment of revelation: “I can remember very vividly hearing the voice of God saying so clearly ‘What if I don’t want you to sell a million records? What if I only want you to sell a few hundred records to the people in your church and to the people on the Southside of Chicago?’” She settled in her heart that her perspective needed to change. “I just want to do what I love to do and let Him be pleased with me. Shortly after that I started formulating a plan.”

Anita co-produced the album with acclaimed songwriter/producer Rick Robinson. Together they developed the material and recorded it live in Chicago at Fellowship Missionary Baptist Church. The Southside church founded by Rev. Clay Evans is also the ministry where Anita currently serves as worship leader.

Without question, the album’s crowning achievement is the mesmerizing ballad “Speechless”. Written by Robinson, the thoughtful lyrics hold special meaning for Anita: “So many scriptures speak of being in awe of God. He loves us so, even though we know we are a mess. Every time I minister that song, I’m just looking up in the air and singing it to God as if He was right there.”

Powerful and moving from beginning to end, Anita Wilson’s debut collection is refreshing and authentic. Worship Soul is a richly painted portrait of a truly inspired artist, a deeply committed worshipper.