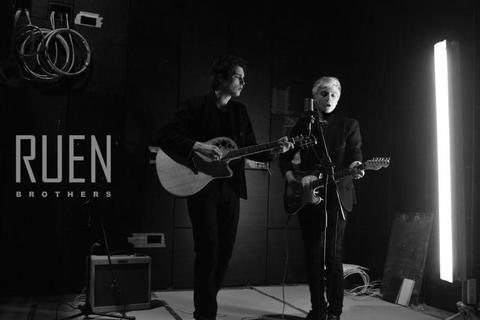 'ACES stunned me. The instrumental introduction made me think of the
Black Keys ... then in came the vocals reminiscent of Brandon Flowers.
Dare I say it, this sounds like a commercial single.' Paul Gambaccini

'Going to have a very full and rich career.' Sir Cameron Mackintosh

‘These guys are going to be huge: @ruenbrothers. MASSIVE potential is an understatement!’ George Ergatoudis, Head of Music at BBC Radio 1

In a steel town nearing the north east peninsula of England , 'Ruen Brothers' were born/formed/created. There are a few things Scunthorpe has brought to the world; Steel, Howard Devoto and Elliot Morley are probably what come to mind if you have a good think... Now two brothers, Rupert (Guitar/Vox/Harmonica) and Henry (Vox/Guitar) Stansall - a duo, clad predominately in black - who echo the sounds of the early to mid 60's, combined with what they describe as their "own thing" to create "a new genre" are set to hit the scene.

Imagine reverberant swells of Phil Spector's 'Wall Of Sound' pulsing through you, mixed with unique, melodic guitar riffs that Keith Richards would turn a smile to, vocals which derive from hours of listening to Orbison and the like, and that may paint a bit of a picture for your ears... eyes... ears. The sound is BIG, with elaborate melodic hooks and lyrics, straying from the 'Throw your hands in the air' and 'Oh oh oh's', of the majority of today's - rightfully changing - music scene.

Ruen Brothers write/record and produce almost everything you will hear, with the exception of hooking up with producer/writer Matt Schwartz (Massive Attack/Clement Marfo & The Frontline/Kylie) for their track 'What's Going On'.

Visually it's simplistic, black/white/cinematic, you might get a few pastel colours thrown in for good measure; art is art, music is music, music is art and art is music... Ruen Brothers like to have a lot of artistic control. They direct the shot's, edit the imagery and design a lot of what you see.
After moving away from their reasonably sheltered home town and down south to the clichéd 'bright lights' of London, Ruen Brothers are set to inject something new into the music scene, come follow the journey.