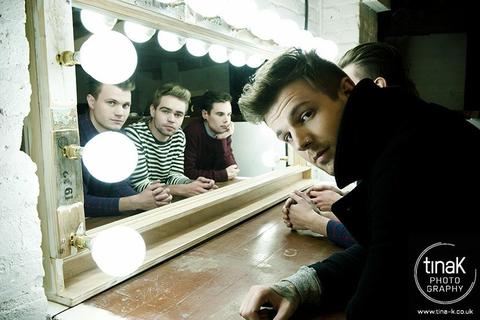 Kerrang! say they’re “one gloriously deranged cacophony”. Rock Sound say they’re “a schizophrenic force to be reckoned with“. They say they can never die. Hailing from small towns but making big sounds, Blitz Kids have provided main support for D.R.U.G.S, opened a tour of the UK and Europe with Mayday Parade, had Aled Phillips from ‘Kids in Glass Houses’ perform guest vocals on their single ‘Story’ and to top it all off, they were also nominated as ‘best British Newcomers’ at 2011’s Kerrang! Awards!

With the release of their debut album 'Vagrants and Vagabonds' last year on Hassle Records, Blitz Kids proved all this praise to be true with one of 2011's most vibrant and exciting British records. With a further tour thrashing the UK supporting Kids in Glass Houses and a rock-star jaunt off to LA to demo new material with producer John Feldmann of Goldfinger fame.

Since then you may be inclined to think things have gone a bit quiet in the Blitz Kids camp, but in fact it's quite the opposite. With a recent member change, the band have been honing their sound and writing so much material that they decided to release a mini album on November 26th and hold off an eagerly awaited sophomore album to keep us all drooling.

“We wrote too much so we're releasing a mini album first,” boasts guitarist Jono Yates, “it's been so mental behind the scenes with writing and everything else.”

In October 2012 the band headed out for yet another UK tour in support of massive Aussie pop-punkers Tonight Alive and Brit post-hardcore rockers LostAlone. With the new mini album out and a UK headline tour under their belts, Blitz Kids are set to continue their UK rock domination that has already caused such a ruckus nationwide.

Get ready for a storm; Blitz Kids never die.