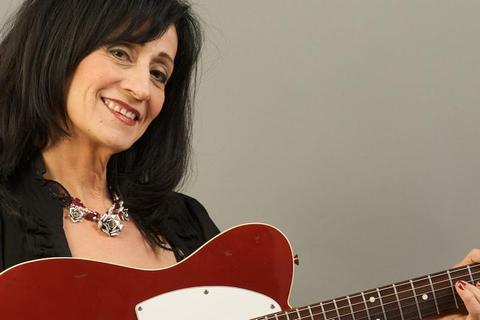 Award-winning Girl of the Century, Working Girl with Guitar Rosie Flores has gone surfing, knifing her turquoise axe through some new uncharted musical waters.
After a busy few years that found her nabbing a Peabody Award onstage at the Waldorf Astoria in New York City for her narration of the documentary "Whole Lotta Shakin"; producing Janis Martin's soon to be released CD on Cow Island Records; and a multimedia Janis Martin Tribute that she created and performed at the Rock n Roll Hall Of Fame this year, Rosie released Girl Of The Century (Bloodshot Records) and is half way into a brand spanking new CD, Working Girls Guitar.
The new record marks a first for Rosie as she is the only guitar player, in addition to penning some new tunes that ride some new waves. Twanging between a rock and a surf place, Rosie fires up the big chord guns on songs that tell some hard earned tales.
The title track is a chiming stomper that resonates with miles of grit, grace and determination; while “Yeah, Yeah”, a tribute to her late great fellow twang master Duane Jarvis, shines with a light that glows through the tears.
Flores took flight in Southern California, and has been a major figure in the Los Angeles, Austin and Nashville music scenes – as well as in Europe and Japan. She added new pins to her world map when she played several big festivals in Australia last year (Port Ferry, Apollo Bay, Brunswick Festival) and tore it up the year before in New Zealand.
Critical raves from prestigious publications such as the Los Angeles Times and Guitar Player magazine, an LA Weekly Music Award for Best Rockabilly Swing Artist, a 2007 cover story in the Austin Chronicle, and the proclamation of Rosie Flores Day in August 2006 by Austin Mayor Will Wynn was topped off by an induction into the Austin Music Hall of Fame in 2007. She was recently voted as one of the "Top 75 Greatest Female Guitarists of All Time" by Venuszine.
After a stint with the cult cowpunk band Screaming Sirens, who recorded an album Fiesta, with Enigma and appeared as themselves in the films The Runnin’ Kind , and had cameo roles in The Vendetta and Reform School Girls. Signing with Warner's Reprise subsidiary in 1987 as a solo artist was her first major break. The label hoped to light up the country charts with a female version of Dwight Yoakam, and paired Flores with Yoakam's producer/guitarist Pete Anderson. The self-titled release spotlighted Flores as a stylish, fiery neo-traditional singer who played explosive guitar solos to match. The album yielded three singles, and "Crying Over You," earned Flores her first Billboard chart appearance. She was also the first female Latina country artist to ever enter the Billboard country charts.
Early in her career while recording for Warner Bros. Records she was nominated for best "Horizon Artist" by the Academy of Country Music in California. She had a cameo role in River Phoenix's final film, A Thing Called Love in 1993.
Yet it was 1995's Rockabilly Filly that received the most attention, because it reintroduced rockabilly pioneers Wanda Jackson and Janis Martin to audiences worldwide through their duets with Rosie and a successful 1995 tour with Jackson. Moreover, Flores's self-penned "You Tear Me Up" is arguably the best performance by a contemporary female rockabilly artist. She recorded more records including After the Farm, Once More With Feeling, Bandera Highway (HighTone), A Honky Tonk Reprise, Dance Hall Dreams (Rounder), Speed of Sound (Eminent), A Little Bit of Heartache (with Ray Campi, Watermelon), and Single Rose and Christmasville (Durango Rose Records).
Rosie's solos recordings have found homes on both the Billboard and Gavin charts and are featured in seven motion pictures. Her revved-up performances from California to New York have won legions of fans and earned appearances on such nationally broadcast television programs as "Austin City Limits" and "Late Night with Conan O'Brien." She is currently appearing in the documentaries Every Night is Saturday Night: The Story of Wanda Jackson and Sweet Lady with the Nasty Voice.
Rosie toured Japan for the first time in 2007, and followed that with her 21st tour of Europe through Switzerland, Germany, Austria, France, and Spain. She headlined at The Americana Festival UK 2008, held in Nottinghamshire Newark England.
Endorsed by Fender at the 2008 NAMM in Anaheim, CA, Rosie was chosen to open a special show celebrating 65 Years of Fender along with Dick Dale, Billy Gibbons, Jimmy Vaughn and Cindy Cashdollar.
With a new tour, new CD under way and trails of shiny accolades around her, Rosie Flores is taking on the future one swell wave at a time.