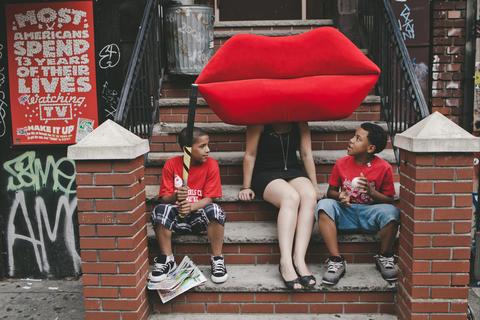 A talented keyboard player with a soft spot for vintage synths, Stephanie Brown a.k.a Lips performed extensively in her native New Zealand with some of the nation’s most successful artists before moving to New York in 2007. She formed the band Fredericks Brown with Deva Mahal, releasing an EP “Out of the Rain”, then in 2010 Brown decided to take the leap and make music in her own right.

Characterised by a giant pair of lips on legs, Lips is that solo persona. Having already won comparisons to the likes of Oh Land and Little Dragon, hers is a unique sound characterised by masterful songwriting and a sly sense of humor. Whether it's loneliness or love, anger or happiness, Brown has a knack for capturing the bittersweet nuances of life and putting them to song.

Having released an EP via Bandcamp in 2010, Brown then released the track "Everything to me", which received critical acclaim and went on to win the 2012 Silver Scroll, New Zealand’s most prestigious songwriting award.
In October 2012, Lips will release her second EP entitled “Look, Listen”, which features this award winning song, as well as her new single “We don’t have much time”.

As Lips, Brown's ability to both transfix and entertain make her a must see live act.