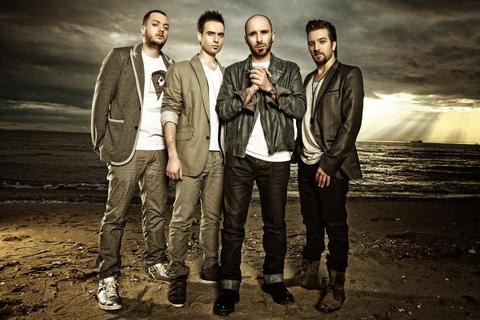 Listen to Life is Good To Me

Gripin was formed in the year 2000 and has 4 band members. Birol Namoglu on vocals, Arda Inceoglu on bass and keyboards, Murat Basdogan on guitars and Ilker Balic on drums. They compose and write all their own music which is in the pop-rock genre.
Gripin have performed at many festivals with internationally known musicians and bands like ‘Cake’, ‘Shed 7’, ‘Reamonn’, ‘Myslovitz’, ‘Placebo’, ‘Skin’, ‘Evanescence’, ‘Travis’, ‘Skunk Anansie’, ‘Franz Ferdinand’, ‘Manic Street Preachers’, ‘Within Temptation’, ‘Badly Drawn Boy’ and many more. Also they performed at rock bars, including the most famous one in Istanbul ‘Bronx Bar’ every Saturday night for four years.
In 2004, they released their first studio album ‘Hikayeler Anlatildi’. In 2005, they released the second edition of the first album, ‘Hikayeler Anlatildi 2.Baski’ including unplugged versions and live performances. With the success of these two albums they performed over 550 concerts at 41 different cities.
In 2007 ‘gripin’ released their self-titled album. With the success of this album they went onto receive many awards including:
‘Hurriyet Altın Kelebek Awards’: Best Breakthrough Artist of 2007
‘Powerturk Music Awards’: Best Song of The Year 2007 for their song ‘Sensiz Istanbul’a Dusmanim’
‘Powerturk Music Awards’: Best Duet of The Year 2007 for their song ‘Sensiz Istanbul’a Dusmanim’
‘Istanbul FM Awards’: Best Song of The Year 2007 for their song ‘Sensiz Istanbul’a Dusmanim’
‘Istanbul FM Awards’: Best Duet of The Year 2007 for their song ‘Sensiz İstanbul’a Dusmanim’,
‘Yildiz Technical University Awards’: 2007 Best Band of The Year.
In 2009 ‘gripin’ composed the theme music ‘Komsu Kizi’ for the popular TV sitcom ‘Genis Aile’ http://www.youtube.com/watch?v=X0IyBvKyBOM the popularity of this song lead them to accept:
‘Istanbul FM Awards’: Best Theme Music for a TV Show 2009.
On the 5th of March 2010 ‘gripin’ released their latest album ‘M.S.05.03.2010’. This album
created an even larger fan following for ‘gripin’ all over Turkey. The first track of this album ‘Durma Yagmur Durma’ made it to the top of Nielsen’s ‘Turkey’s most popular songs on the radio and television’ top 25 list and stayed there for 31 weeks.
In 2012, they were successful enough to land a commercial deal with the leading telecommunications operator ‘Turkcell’ and this TV commercial was shot in Kenya. http://www.youtube.com/watch?v=nmgH7nVufBE&feature=relmfu
The same year also bought them another commercial deal with the confectionary giant ‘Ulker’ which also led to a TV commercial that was broadcast on social media as well for a long period of time. http://www.youtube.com/watch?v=PguY1yCEhAY
With the success of their TV ventures, Gripin was requested to compose the theme song for the new TV series ‘Ucurum’ on a popular Turkish TV channel. http://www.youtube.com/watch?v=UFWkavzHlEU
The band’s most favoured accomplishment for the year so far has been the invitation to compose the new anthem for the world-renowned Turkish soccer team Galatasaray. This song marked the championship of Galatasaray for the 2012 season. The triumph of the new anthem was so immense that a single was released ‘Sensiz Olmaz Galatasaray’. Gripin performed to a large crowd of 55,000 fans at the Galatasaray stadium during the championship celebrations.
‘gripin - ‘Sensiz Olmaz Galatasaray’:
http://www.ttnetmuzik.com.tr/#album-Sensiz_Olmaz_Galatasaray-264752
Gripin performed and composed a duet with “baglama” (traditional Turkish instrument) virtuoso ‘Ahmet Koc’ for his solo album ‘Renkli-Turkce’. The song ‘Sus Soyleme’ was on the top of the charts for numerous weeks.
Ahmet Koc ft. Gripin- Sus Soyleme: http://www.youtube.com/watch?v=64-RwuBpaCA&feature=plcp
The last 2 years have been an immensely busy time with over 200 performances at concerts, university festivals and large tours (Mercedes, KocFest, Rock n’ Coke, Universiade..) not only all around Turkey, but also in Europe (Austria, Belgium, Germany, Cyprus and Switzerland) and Azerbaijan.
The band will release their long-awaited new album in November this year, with preparations of a world tour including Europe, Australia and the USA.