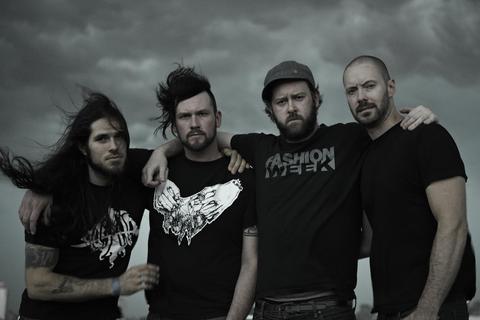 The balance Family strikes is one perfected by precious few bands. To bring the vibes of our forefathers -- the finesse, the hooks, the grooves of say, Led Zeppelin -- into the modern day metal underground; to take a classic rock sense of musicality and use it to make something that's fiercely original, crushingly heavy and not "retro" at all... this is a fine line indeed, a delicate tension that is rarely achieved.

Tool and Mastodon are two bands that come to mind when listening to Family, but there is also a bit of Unsane's savage blues and The Mars Volta's experimental prog. Any way you choose to describe it, Family is undeniably its own beast -- a dynamic new voice in heavy music. And most importantly, the tunes rock with memorable purpose. These are riffs you hum for days.

Based in Brooklyn, Family is comprised of two native New Yorkers and two Deep Southerners, bringing together a wealth of musical influences and life experiences. Guitarist, primary songwriter, and native Manhattanite Steven Gordon writes for preeminent music blog MetalSucks. Second guitarist Joshua Lozano, a Queens native, was employed for years at the legendary CBGB, and also plays with avant-black metallers Cobalt and former Swans vocalist Jarboe. Drummer Jody Smith came to the Brooklyn metal scene by way of the funk and jazz of his hometown New Orleans and bassist/vocalist Kurtis Lee Applegate -- a towering hulk of a frontman -- doubles as the world's friendliest chef from South Carolina.

Within just a couple years of existence, Family has claimed its place at the center of the booming Brooklyn scene, alongside peers like Hull and Primitive Weapons. From this vantage point the group transmits a truly familial vibe back to the friends, fans, and other bands that populate its shows. It was with an unbridled sense of joy and sincerity that, at the end of Family's first-ever live set, Applegate spontaneously proclaimed what would become his signature phrase: "We are Family... and so are you."

The band's debut, Portrait, is a concept album about a dysfunctional family that develops supernatural powers. It was engineered and mixed by Justin Mantooth at Translator Audio (Unsane, Cave In) and mastered by Alan Douches at West West Side Music (Mastodon, Torche). The front and back cover artwork is a pair of original paintings made specifically for the album by New York artist Eric Diehl. Close friend John Lamacchia -- guitarist of Candiria, Julie Christmas, Spylacopa, Crooked Man -- makes a guest appearance on the track "Daddy Wronglegs". (Original guitarist Owen Burley and drummer Phil Sangiacomo recorded for Portrait before Lozano and Smith joined the band.)

Portrait caught the ear of Robin Staps, founder and guitarist of seminal German band The Ocean, after he witnessed the fury of a live Family set. In Staps' words, Family's debut album is "crushing and unique, unlike anything I have heard... all killer, no filler."

Staps will release Portrait via his own label, Pelagic Records (home to music by The Ocean, God Is An Astronaut, and Hypno5e), in Germany on October 26th and in the rest of Europe on October 29th. The band will release the album in the US on October 30th.