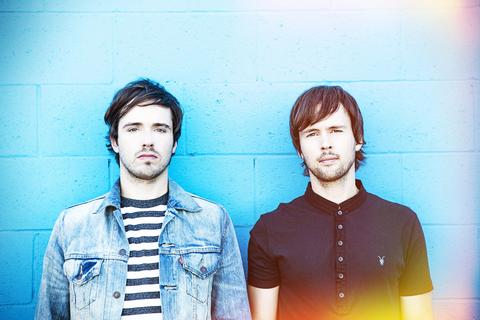 In November 2009, the members of Adelaide, Australia’s Atlas Genius set about building a studio where they could write and record music for their newly formed band. For two years, brothers Keith, Steven, and Michael Jeffery devoted their days to constructing their dream studio and spent their nights performing songs by The Police, The Beatles and The Rolling Stones at local pubs to pay the bills. “We really got down and dirty with drywalling and literally laying the floorboards, and at the same time we were taking a couple of days a week to focus on writing songs,” recalls Keith, Atlas Genius’s vocalist/guitarist. The studio was designed and outfitted by the brothers with the help of their father (who comes from a music and engineering background). Once the studio was complete, the first song that Atlas Genius finished was a song called “Trojans,” which they wrote, recorded and produced in collaboration with their friend Darren Sell. After many weeks tweaking the song, Michael insisted that the song was ready to be heard outside of the studio walls. Within an hour, “Trojans” was on the Triple J Unearthed Website, SoundCloud, and for sale via TuneCore on iTunes, Amazon and Spotify worldwide.

“We had begun to think that music was a pipedream and we had all gone back to university to pursue more realistic careers” says Keith. “We’d had such a long slog of playing late nights and working all day, and it felt like we didn’t really have anything to show for it.” But then, in the midst of cramming for their Fall 2011 semester final exams,, Neon Gold discovered “Trojans” on the Triple J Unearthed Website and wrote a post praising “Trojans” as a song sure to “invade your head, all dressed up in a clever disguise of earnest vocals riding a hooky riff.” Checking the band’s email account for the first time in over a month, the band found that dozens of record labels, publishers, lawyers, booking agents and management companies from all over the world had contacted them.

“We were trying to focus on school, but it was just impossible,” recalls Keith. “So we said, ‘There’s something going on here. Let’s get back to the music.’” The band added Manager, Jonny Kaps from +1, to their extended family to navigate all of the interest as the band focused on writing and recording more songs.

Quickly named an iTunes Single of the Week in Australia and New Zealand, “Trojans” reached #4 on Hype Machine by the end of May. In August, SiriusXM Satellite Radio’s Alt-Nation discovered the song on a blog and decided to give it some spins. There was an immediate reaction from listeners, and in September, “Trojans” was placed into heavy rotation, where it maintained a top-five position on the listener-generated Alt-18 countdown and peaked at number one for 4 consecutive weeks in January 2012. “Trojans” began selling over a thousand tracks per week on U.S. iTunes and soon climbed to 40,000 sales - all with zero promotional efforts from the still-unsigned Atlas Genius.

“Knowing we had this audience that was waiting on new songs, we had a much greater sense of purpose than we had before,” says Keith. “It was really exciting to know that there were people who wanted to hear more of our music.” Although labels were clamoring for the band to come to the U.S. and play a series of showcase gigs, Atlas Genius turned down those offers in favor of staying in Adelaide to keep writing and recording new songs. In February 2012, after months of communicating with numerous labels via Skype, the band chose to travel to the US in order to make their label decision.

“We’d never been to America before,” says Keith. “We flew in at night and saw this sea of lights, and it really became apparent to us how massive this country is. It was pretty intimidating - like ‘How do we fit into all this?’” In April 2012, the band returned to the U.S. having made their decision to sign with Warner Bros. Records. “We felt a connection with them,” notes Keith. “Everyone there feels very creative and dedicated to the music.”

The band’s first release from their new label home, the three-track EP Through The Glass (produced, engineered and mixed by the band) captures Atlas Genius’s singular combination of sophisticated musicality and warm, wistful spirit. Infused with a classic sensibility, each of the songs would fit seamlessly if somehow slipped into a long-treasured mixtape. On the shimmering “Symptoms,” for instance, taut keyboard riffs mesh with urgent acoustic strumming before the band bursts into a gently frenetic, guitar-drenched chorus. Meanwhile, “Back Seat” blends its pulsing bass throb with a sweetly infectious beat and tender vocals that alternately soar and sigh. And on “Trojans,” Atlas Genius begins with a restrained guitar melody and vocal (“Take it off, take it in/Take off all the thoughts of what we’ve been”) before giving way to the handclap-accented, harmony-soaked refrain and lush yet kinetic bridge.

With Through The Glass completed, Atlas Genius is now holed up in its studio and working on wrapping up its first full-length album. “It’s still surreal,” says Keith of all that’s happened over the past year. “I think when we were very young, we had hopes that something like this might happen one day,” he continues. (Thanks largely to encouragement from their Beatles fanatic parents, who encouraged the three brothers to begin playing music by age 14.) “But then you grow up a bit and it seems less and less likely. So when we put ‘Trojans’ out, we figured it would be a success if maybe a hundred people heard it.” “So many bands focus on the promotion aspect of the process instead of the music,” says Keith. “All of our efforts go into making the songs as good as they can be. We don’t want to force our music onto anyone. Our goal is to write songs that we love and we hope they connect with other people too – be it 100 or many more.”