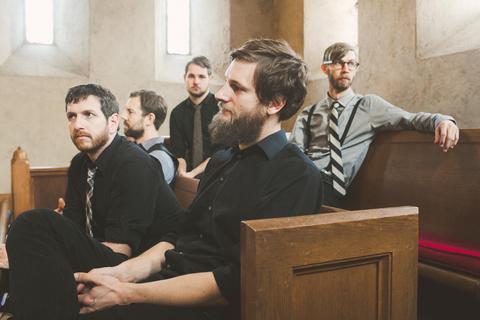 Listen to You, Me & the Boatman

Taylor Muse sang those words in 2011 and the time has certainly come for his anthemic Austin pop-rock band. Formed in 2005 Muse (guitar/vocals) and his bandmates have spent much of the last year in increasingly rarefied air; playing late night talk shows (Carson Daly), performing at the Austin City Limits Festival, setting a record crowd for radio station KGSR’s Blues On The Green outdoor concert series, recording a session in the original studio of the iconic “Austin City Limits” television show, winning a record-shattering 10 Austin Music Awards and receiving glowing reviews for the late-2011 release We Are All Where We Belong.

Mixed by legendary engineer Tim Palmer (Pearl Jam, U2, The Cure), We Are All Where We Belong is a startlingly personal album that finds Muse – backed by Tommy Blank (Guitar), Matt Parmenter (Bass), Jeff Weathers (Drums) and Cody Ackors (Trombone) – growing up and questioning the religious beliefs that underpinned the band’s early work. The album’s gut-punch honesty is presented on a foundation of expansive arrangements that build to anthemic choruses; songs that shift from moments of hushed intimacy to full-on explosions.

“It is easily the most personal thing I’ve ever written,” Muse said. “It is, essentially, a break up record, only the romance that’s ending was between myself and religion.”

That thematic break from past releases – 2009’s “Everyone You Love Will Be Happy Soon” and 2010’s “Songs For Staying In” – is bridged by the band’s songwriting ear for ambitious melodies like Death Cab For Cutie or Arcade Fire, with Pedro The Lion’s soulful honesty mixed in.
Quiet Company's explosive live show is notable both for the sheer energy of the band and the fact that each member is an accomplished multi-instrumentalist, making it a much simpler task to bring their complex studio arrangements to the stage in a fresh, exciting way.

Ever prolific, while the band works its way into a heavier touring schedule, they're also in the process of writing and recording an EP of songs written for Muse's daughter, as well as their next full length record.