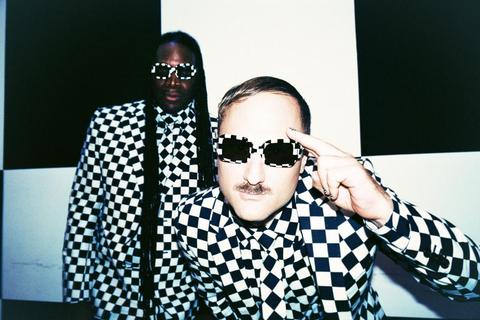 Maximum Hedrum is the new project of producer, composer, director, and DJ Sam Spiegel. The group’s unique electronic-funk hybrid features Sam Spiegel, the vocals of Derrick Green from the seminal heavy metal band Sepultura, and renowned German musician and producer Harold Faltermeyer. Their forthcoming self-titled album is due out on March 5th 2013 via Spectrophonic Sound and examines the way our lives are changing through advancements in technology and the Internet.
Aside from his work producing the Yeah Yeah Yeahs Grammy®nominated sophomore album Show Your Bones and scoring countless films, documentaries and commercials, in 2009 Spiegel founded N.A.S.A (North America South America) whose landmark globetrotting debut LP, The Spirit of Apollo featured jaw-dropping collaborations from the likes of Kanye West, George Clinton, M.I.A., Tom Waits, RZA, David Byrne.
The Maximum Hedrum project was instigated by Spiegel's feelings on the advancements of technology and the resulting impact on our lives. "It was a feeling I had to express," he said. "I really wanted to examine the interconnectedness and isolation this shift has brought... and the desperation that fills the Internet."
After numerous experimental late night studio sessions with longtime friend and Sepultura vocalist Derrick Green in Sao Paolo, Brazil the project was officially born. "Derrick has only ever screamed on metal and hardcore albums before, but on this album he's crooning with his bass baritone voice like Isaac Hayes, and also signing crazy falsetto like Prince. It's really a departure from anything that either of us has ever done in the past," said Sam Spiegel.
"I always imagined and desired to use my voice in as many ways unimaginable," said vocalist Derrick Green. "The combination of working together with Sam Spiegel has open many possibility to expand the boundaries of music. The idea of Maximum Hedrum is to break down all concepts and barriers of the mind and explore the unknown fearlessly. The journey is just beginning with so many endless possibilities with Maximum Hedrum."