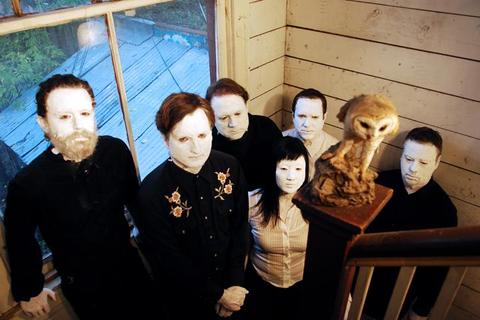 COME FLY WITH US!

(Reuters) These are some of the interesting things you’ll see on your next long distance flight, courtesy of My Education:

-Bukowski’s gin-soaked bars, where Mickey Rourke orders more libations for his boon companions
-The half-pipes, grind rails, and bad haircuts of Mr. 1986
-The midi-enhanced cavemen of Roboter-Hohlenbewohner
-The final testimonials of the pilots of doomed airliners
-A frenetic and violent outburst from a laboratory golem

These and other fabulous environs will be reached by the listener as he or she revels in the richly rewarding cinematic journey that is A Drink for All My Friends, the new LP by Austin instrumentalists My Education. Recorded in almost painfully sincere high fidelity sound by Alex Lyon at the Bubble, this album is, quite simply, a motherfucker.

None could doubt the ascendancy of My Education after the success of Sunrise, their last album, composed of pieces from their original score for F.W. Murnau’s 1927 silent masterpiece “Sunrise: A Song of Two Humans”. Having perfected the Sunrise material with live film performances over the last two years that sold out shows across the USA, My Education has now moved on to the most dramatic and heaviest expressions of their career. A Drink for All My Friends is released on Haute Magie in the USA on Nov. 6th, and on Golden Antenna in Europe on March 7th.

Since forming in 1999, the band’s membership has expanded and contracted while the sonic landscapes have grown with each release. My Education has released 5 full-length albums, several singles, compilation appearances, and a 12" vinyl collaboration with avant-hip hop duo Dalek. Recordings have been remixed by members of bands Kinski, Pelican, the Red Sparowes and Dalek. Their previous albums include 5 Popes, Italian, Moody Dipper, and Bad Vibrations.

My Education have toured the US regularly since 2001; done regional tours with both Maserati and the Red Sparowes, and shared the stage with A Place to Bury Strangers, Kinski, Bardo Pond, Dalek, The Black Angels, The Sea and Cake, Warpaint, Alexander Hacke/Algis Kizys duo, The Soundtrack of Our Lives, This Will Destroy You, Sleepy Sun, White Denim, Radar Bros., Eluvium, Sian Alice Group, Don Caballero, Trans AM and many others.

In June 2010 the band completed a series of improvisational recordings with Salt Lake City ensemble Theta Naught that were released April 2011 on Differential Records. "SoundMass" performances at SXSW and Austin Psych Fest were greeted with wild acclaim, and a Daytrotter SoundMass session was released in July 2011. Vinyl of this release is brand new and out now – more SoundMass performances are currently being scheduled to promote the vinyl and new recordings are also in the works. My Education’s collaboration with the Noble Motion dance company premiered with three sold out shows in June 2011 at the Austin Ballet. A new limited edition CD of Sunrise remixes is out now on Reverb Worship as well as a limited edition live “bootleg” CD entitled “Bamboozled” from the band’s 2010 tour. On the horizon: My Education’s first European tour now booking for spring 2013.